It's About the Journey, not the Destination apparently

The sheer number of amazing places in south France never fails to amaze us.  On Tuesday we thought we might visit Sarlat as well as one of the most beautiful villages in France - La Roque-Gageac about 45 minutes away.

On the way we stopped at Domme, known as the Acropolis of the Dordogne.  From the walkway beside the ramparts we had a spectacular view of the Dordogne River Valley. 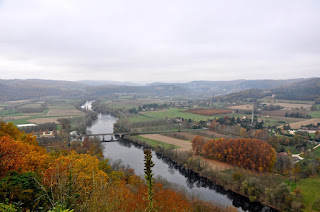 You enter the city through one of two gates from the 12th c. and the one below was most impressive even if a bit crumbly. The round towers were converted to prisons to hold the Knights Templar that were arrested by the king in 1307.  They really made things to last in those days! 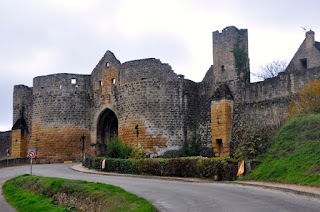 Just a few kilometers down the road was La Roque-Gageac and it was apparent why it was on the list of most beautiful villages in France. Wedged between the river and a steep limestone cliff, this village actually had about 3 narrow roads you could climb up, with homes partially build into the cliffs. The road going through town was entirely blocked off from car traffic as it looked like they might be working on the wall between the river and the road.  As well, the entire town seemed deserted much like the other towns we visited. At least there were none of those pesky tourists to deal with! 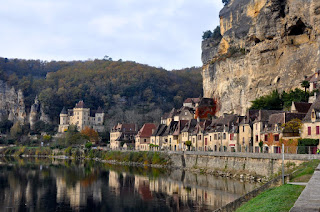 Built into the cliffs above the town were the remnants of the troglodyte caves. I think you might be able to explore them during the summer but it was unclear.  In 1957 a chunk of rock fell off the cliff face and killed three residents.  I think it's on the left part of the cliff face in the photo above. 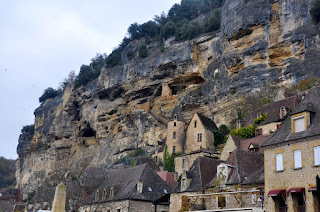 Because the entire road through town was blocked off we worked our way through some extremely narrow roads and around the back of the cliff towards a chateau we'd seen on the map.  Again, the words 'perched high on a cliff' seem redundant as they describe almost all the chateaux here. Château de Castelnaud, a medieval fortress, had displays of weaponry from different eras including several trebuchets - one is visible on the top in the photo.  The entire fortress was well preserved/restored. The setting sun also highlighted the beautiful honey-golden colour of the buildings in this region. 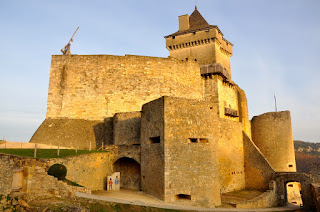 With a chill in the air as the sun started to go down, we began the short trip home, realizing that we never managed to reach our destination of Sarlat.  Too many amazing distractions along the way.

The day began a bit grey and drizzly in Carcassonne with the French army conducting some kind of manoeuvres/ceremony directly across the road from the guesthouse.  They were using an area in the park that is normally used for playing 'petanque' which is a VERY popular pastime in the south of France (similar to bocce). 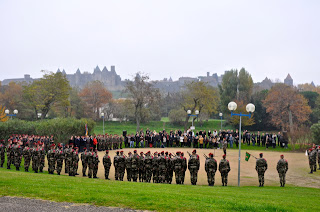 The day got greyer and foggier as we made our way up through the hills towards Millau but just as we got closer to the viaduct it seemed to lift and we were just left with grey clouds.  It is an impressive structure to see, particularly because there isn't really anything around it. It took us an extra few hours to get home but here are some photos just for you John! 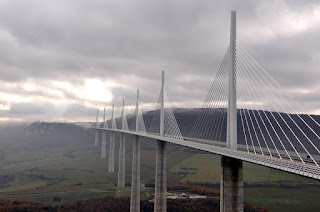 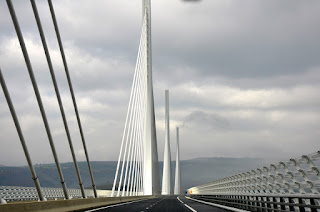 Castle on the Hill

Quite a bit of downtime the last two weeks but now that Scott, Sam and Mike have arrived in France we've reverted to tourist status again. First stop, the amazing medieval town of Carcassonne. It exceeded all our expectations and the guest house we're staying in has this incredible view from the terrace.

The chateau and walled city on the hill are only part of the charm. The 'new' city is filled with meandering paths (I think they call them roads here) and all manner of quaintness.

The weather has taken a nice turn for the better and is all sunny and warm again after a few colder days in Prayssac. Of course we're a bit closer to the Mediterranean here. We're very fortunate to be together with our far-flung family (!) and we perched on one of the many ramparts for this photo op. 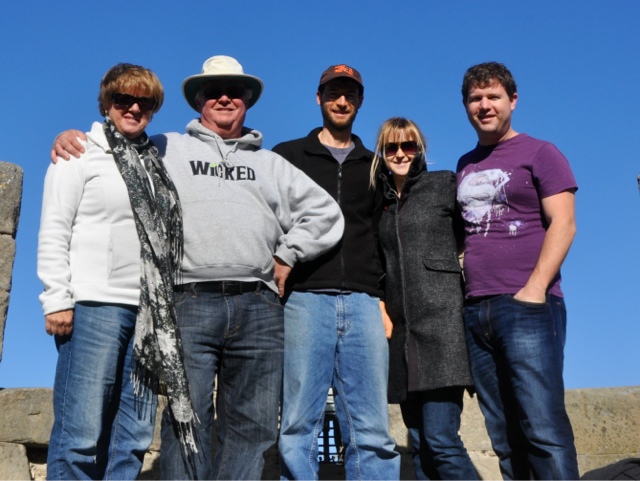 Tomorrow we'll return 'home' and along the way we'll stop at the Millau viaduct - the tallest bridge in the world. From a 13th (?) century marvel to a 21st century one.
at November 15, 2012 1 comment:

It seems like Halloween is celebrated in France similar to Canada.  Children dress up and say "bonbon ou un sort" (trick or treat?) and we did see a few costumed kids in town yesterday. This has become more and more popular in the past 10 years. We live on a quiet little road a bit out of town so we had no one knocking on our door. There are no decorations in stores or homes and we never saw a jack-o-lantern (in fact few pumpkins).  But the real 'celebration' happens the next day sometimes called Toussaints, or Jour des Morts (Day of the Dead), or All Saints Day.  It's a public holiday and knowing what I know about Nov. 1 in schools all over Canada, it likely should be a holiday there as well!

On November 1, people take flowers to the cemetery and we noticed quite a few cars beginning to stop by the local one yesterday.  Apparently chrysanthemums are popular and there have been a lot on sale lately - now I know why. At other times of the year there are a lot of plastic bouquets on the graves and one flower shop we went in had 90% plastic flowers, much to Alanna's dismay.

Also starting on November 1 in France a new law, which took effect in May, will be enforced.  Drivers are required to have a breathalyzer kit in their car.  Apparently this will not take the place of the police breathalyzers but I think they're intending it to be a self-monitoring device. Ross had read up on this when he was trying to figure out all the driving signs so a few days ago we set out to buy one.  So far we've looked in 6-8  dozen stores and nobody seems to have them. So if we get stopped, hopefully the police will have enough trouble trying to figure out what we're saying that they'll forget to ask about it!
at November 01, 2012 1 comment: