Let’s just say the incident involved a tree, the motorhome awning, a handsaw and Ross's finger. And let’s add that it’s a good thing we don’t have an itinerary for this trip ‘cuz if we did it just went out the window. Let me finally add that it appears that some people will do anything to get out of having to play golf against me.

The details: Immediately following the aforementioned incident on Thursday night, and with Ross trying to stem the flow of blood on his finger, he had me rummage around in his golf bag for a measly bandaid. I’ll also add this may be the first road trip we’ve made without the first aid kit. Figures. The bandaid wasn’t really very effective, and since it was 9pm we wandered down to the check-in station to see if they could help. They provided a couple more bandaids to hold him over till morning.

By 10am we were at the local Yellowstone Park medical clinic and Ross went in with a bandaid on his finger and came out 1 ½ hours later with the following apparatus. 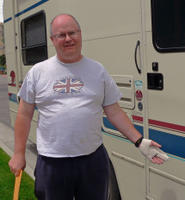 By 2:00 we were 100 miles down the road at the Jackson, Wyoming hospital and by 5:30 he’d had surgery and he left with an even bigger apparatus (sort of a cast) that has to stay on for a month. The cut itself wasn’t too bad but he’d completely severed the tendon so the doctor had to clean it out and stitch it up. The scariest part for Ross was that, since he’d had anesthetic, I had to drive the motorhome to our campsite. I think I did a pretty good job considering I hadn’t driven anything that big since the McLeod Transfer 3 ton moving truck when I was 20.

So it looks like our trip to Yellowstone is over but we did manage to get a good impression of it. There are thousands of “geothermal features” many of which are geysers. Old Faithful is just one of the fairly predictable ones but we saw many on our trip through. At various places there are many boiling, gurgling, steaming, gushing and bubbling pools and ponds. I guess that’s what happens when you live in a volcanic crater. Here are a few small ones spouting off. 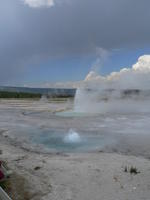 Here’s a little tip for the next time a bison and her calf decide to stand in the middle of the road and cause the traffic to back up for half a mile in either direction: just drive directly at them and lay on the horn. At least that’s what one guy in a truck did after we’d sat there for about 15 minutes. It appears that this will at least get them moving to the other side of the road. The bison are plentiful and we also saw a few elk. 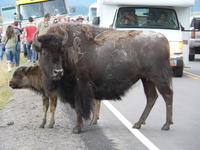 Well the finger thing doesn't look too horrible, but he really should have that nasty stomach swelling looked at.

Does this mean Ross is going to have to take up right-handed golf? Maybe Clyde can get him a deal on new Pings.