The title above is the name of the laundromat we're parked beside 'borrowing' their wi-fi access. Don't you just love laundromats with wireless? We're still in Jackson, waiting to see the doctor tomorrow (Monday). Jackson is an upscale old west style town, if there is such a thing. We found a cheaper campground in the Teton National Park and yesterday drove over to the Jackson Hole ski hill (about 10 miles) and took the tram up to the peak at 10, 450 feet. It was cold and windy (45 F) and ours was the last tram down before they shut down because of the weather. Who knows how long we would have had to wait up there before the weather cleared up.

Since we haven't received any suggestions for the rest of the trip we decided to head for Seattle and take in a few ball games. Checked the schedule and it looks like we're out of luck - the Mariners are out of town. Plan B: head to the Oregon coast and head up the Olympic Peninsula, over to Seattle and up to the Vancouver area.

For those following the saga, Ross's new apparatus: 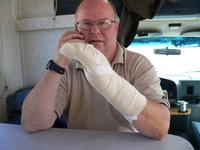 Gratuitous shot of a moose: 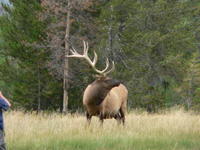 This whole blog thing is pretty cool. I hadn't looked at it until this morning. Cefer is trying to help me right now so it's hard to type. There's lots of neat stuff along the Washington Coast. We once spent couple of days in a little touristy town called La Conner which is just west of Mount Vernon.

Sounds like you guys are having lots of fun...what can either of you do for an encore?
Darlene

well, here we sit, awaiting words from the missing (for the last 3 days anyway). Today, the 17th, is a day to enjoy - Happy Anniversary!!