On our way to Yellowstone

Some highlights from the trip so far:

What kind of yahoo would drive through a Wal-Mart parking lot at 1am honking his horn and yelling? Come to think of it, what kind of idiot would park his motorhome in a Wal-Mart parking lot? We drove to Penticton on Wed. night and with nowhere booked (and the slim likelihood of anything being available this time of year) we decided to join the other losers in the W-M parking lot. Ross even took the opportunity to go on a shopping extravaganza. 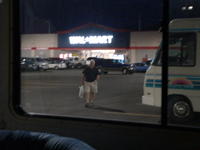 Slow round of golf in Castlegar, our first clue should have been the fact that we were right behind 16 guys on a stag! Fortunately we made it to our dinner reservation at our favourite Castlegar restaurant Gabriel's. As usual, Ross spent time looking for his balls on the course. 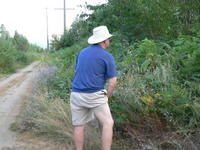 On Friday we golfed Kokanee Springs where I managed to take $22 off Ross - beat him gross too. He hasn't paid up yet - could the humiliation have been too much for him?

Last night we stayed in Sparwood which we think must be the most easterly community in BC. It also has the 'world's largest truck'. 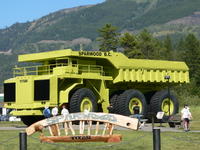 We also stopped in Frank, Alberta, the scene of the famous slide in 1903 which brought down several million ton of rock onto the town, killing many who lived there.

Today we are in Waterton Lakes National Park in the spectacular Rockies of Alberta. The campground has wireless for $10 a day but when I fired up the laptop, lo and behold, there's another wireless somewhere in the area. Thanks, fellow camper, whoever you are.
We have a tee time for tomorrow at the Waterton course, then on Tuesday we'll try to make it out of the country, towards Montana.
at August 07, 2005