Yesterday we wandered over to the largest street in the world, Avenida de Nueve de Julio. It actually took us 2 or 3 lights to get across the whole way. It was designed after the Champs Elysees and is home to various landmarks such as the obelisk. A short walk away was the Casa Rosada which I believe is now a museum but I'm not sure it's open to the public right now. It's the one where Evita stood on the balcony and addressed the masses.

You know the rule about 'pedestrians have the right of way' well apparently that doesn't apply in BA. In fact the cars (mostly taxis) will actually race you to the interesection to see who can get there first. If you don't make an effort to get across you may be waiting all day (where there's no light in particular or where the taxis are turning). They certainly aren't going to stop or wait for you. 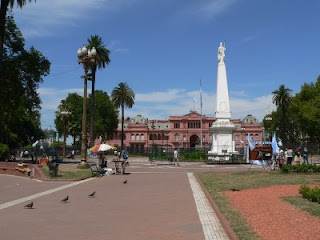 First thing this morning we went to the Brazilian embassy to get a VISA for our trip to Iguazu. We filled out the forms, had our passport sized pictures taken, printed off a recent bank statement, stood in line then discovered we couldn't get the VISA until Monday at the earliest. Since we're leaving Saturday it was actually all for naught. So we're just going to take our chances. Later today we'll take a city tour although the tour is an hour later than posted due to the heat.
at December 18, 2008