The top of the bottom of the world

Weather here has become stunning - mid 20s with a slight breeze. So we took advantage and went to Cape Point yesterday - it's quite a ways up so Scott and I climbed while Ross took the funicular (little train thing). Wildlife alert - we saw some zebras, elands and dassies (little furry creatures related to elephants) but the dangerous wild baboons were nowhere to be seen. A bit further around the bay was the penguin colony, thousands of penguins from one breeding pair in 1982!
Today we finally did Table Mountain with unbelievable views of the cape. Scott and Sam did the hike up (about 2 hours) and Ross and I took the cable car. When we saw the state most people were in when they reached the top we were extremely grateful for the cable car! In the background, to the right of my ear is the soccer stadium built for the World Cup - Sam and Scott live just a few blocks away. To the left you can get a glimpse of Robben Island. 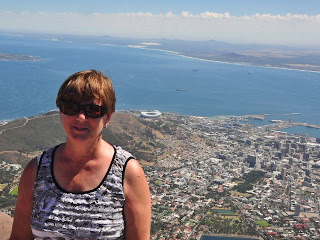