To me travelling to other places means learning about the history and culture of that place and in South Africa much of that is embodied in the township of Soweto. Today we arranged a walking tour with Ntombi, a tour guide who lives there. She met us at the Orlando Police Station and as we walked through the streets she explained how the township grew and developed. 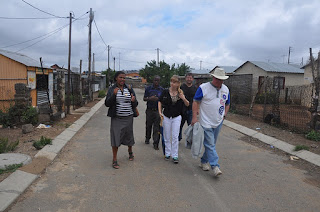 We walked past many, many small and barely liveable shacks, many roadside businesses such as barbers or hair salons and spazas - little 'stores' that sell mostly stuff like pop and chips. It seemed curious but apparently during apartheid, they weren't allowed to have businesses in this area so, despite so many thousands (millions?) of people living there, there are no real 'shops' unless you go to the main roads.
One of the many roadside barbers: 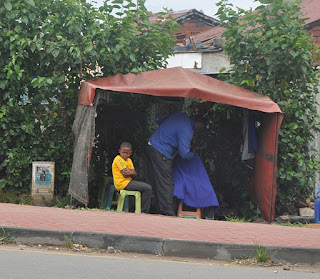 On the way, groups of children suspended their road soccer game to come running afer us, posing for photos and holding our hands. Some of the children had marks on their foreheads which Ntombi explained was still a custom in some tribes - cutting the skin ensures that the child will grow. 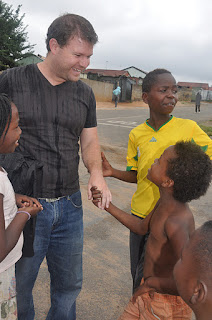 Ntombi invited us to enter one of the houses, which turned out to be hers. She recently purchased it and shares it with 2 others. It had a small living area, 2 bedrooms, and a bathroom - probably less than 40 sq. meters - and she served us refreshments (coke, biscuits) around her small table.
After walking past Desmond Tutu and Mandela's houses we visited the Hector Pieterson museum. Hector was the 12 year old boy shot by police during the 1976 student uprising. Following the lively and vibrant community of the township, the museum was quite stark and sobering. The reason the students were protesting was because the government was requiring that all their schooling be in Afrikaans, which none of them spoke, including the teachers. This amounted to the same thing as giving them no education at all. Several hundred students were shot by police that day, some as young as 7.
A ride on a mini bus took us back to the police station and the end of the tour. Mini buses in South Africa are an interesting form of transportation - more about them later! We did arrive safely in case you were worried.
at December 27, 2011

Have just caught up on all your blogs, Lynn, and will return regularly. What a great experience you are having. Made so much more authentic by having Sam, a genuine South African, as part of the family to ground you in the real thing. Are you reading the newspapers to get the pulse of what’s happening in the country? I’m just about finished reading “Killing Kebble” which apparently has taken the country by storm.
Susan