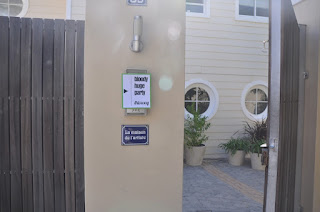 Even without Elvis, Scott and Sam's wedding turned out to be exceptional. With a setting that spectacular it was hard to imagine it being anything but. The whole event could be described as elegant informal. Sam and Scott had really planned everything down to the last detail, including 40 blankets in case the evening got cold (which it really didn't). Pre-cocktail munchies included multicoloured smarties and popcorn with truffle oil. 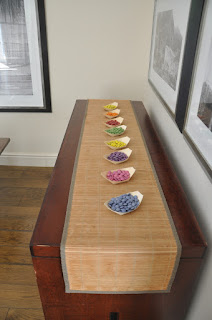 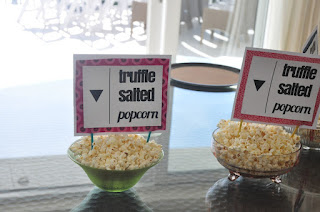 The guests started arriving around 4 or 5 and mingled on the decks as appetizers were being delivered. Five special cocktails were on the drink menu, including chocolate chili mojito (I had 2) and hazelnut martini (1). As the venue was about 25 mins from Cape Town Scott had arranged transportation to and from, but of course it was a bit behind schedule which delayed Les, Sam's dad.
Scott and 'best man' Mark don't look too anxious here. 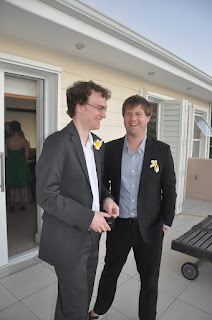 At the appropriate time, guests began to gather on the deck and the informal ceremony began. Sam, of course, was stunning in her elegant white silk gown and their friend Anton performed the service. Dinner followed, a few photos, then everyone gathered in the large living room for a few speeches. All in all it was more like a fancy cocktail party than a wedding; I guess their hopes of a "bloody huge party" were realized.
Sam with 'take-away' balsamic vinegar and oil. 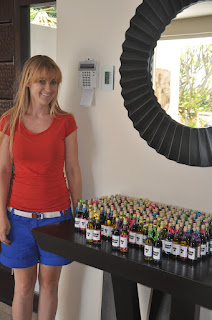 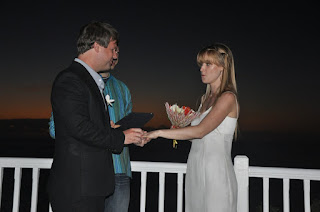 Sam's bouquet, which friend Leanne had whipped up earlier that day, was a large protea (South Africa's national flower) filled with roses.
Ross and I with Louise and Les Marx: 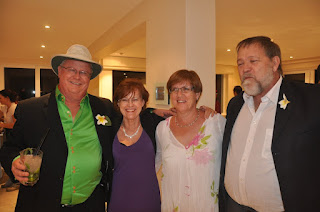