That's a term given to the exploitation of the poor and since this was my 2nd township tour in 2 visits to South Africa I'm wondering if perhaps I'm guilty of it. Khayelitsha is home to about 2 million people in Cape Town, most of whom live without running water and the electricity is questionable at best. We arranged a tour with Nomvuyo run by Jenny, who, although white, has been working to make a difference in Khayelitsha. Although it was called a tour, it was more like a community walk-about. We started by visiting the home of her 'adopted' mother and brother. Her 'brother' accompanied us on the tour, I think he acts as a sort of protector. There was nothing that spoke of danger on our tour, but we had seen the pictures in the news, from 2 days prior, of some vigilante justice - 2 criminals, who had been stealing from the residents, had been beaten and set on fire.
Outside the home an impromptu cricket game was underway. 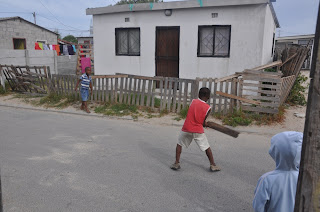 It's interesting to note that in one of the most 'dangerous' places on the planet, kids played happily in the streets, unlike in Canada where it's just too dangerous!
As expected, with a bag of sweeties, the word quickly spread through the community and we were bombarded by children of all shapes and sizes. Here Lynn McRitchie and Leanne try to manage giving only one each! 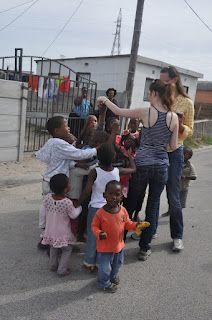 Nothing is cuter than twins! 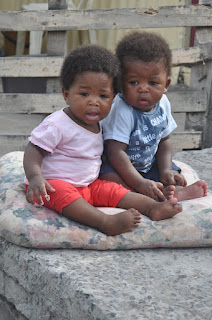 Each outhouse is shared by about 5 or 6 families and is secured with a padlock. However, one key means that you may have to visit your neighbour's before you make it to the outhouse. We also had a few young men, grade 9 and 12, join us on our walk about. They are aspiring rappers and hip hop dancers and after a bit of encouragement they performed for us.
Jenny, our guide, seems to have taken on an advocacy role for many of the residents, helping them with any government organizations and regulations that get in the way of common sense. 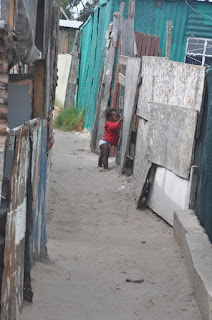 Our next stop was a nursery school. They had just started snack time. You can see the other children crowding at the door. Many of them would like to attend but it's just not possible. 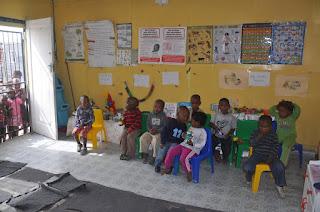 Next we visited a man who was building a restaurant - there's a bar next door and no place to buy food so he thought this was a great opportunity. He had a floor and a roof, a couple of counters but he was convinced he would be operating within a week or 2. When I told him we'd eat there next time we visited he optimistically said he'll have moved on to bigger and better things by then! Lots of ambition.
Golden had a dream - and from the dream he learned how to make a living by creating flowers from discarded soda cans. During our short visit he took the raw materials and created a daisy for us. 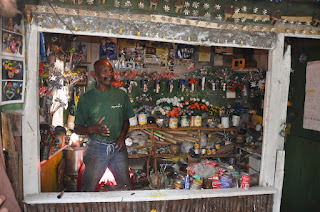 We stopped at the Craft Market where it was hard to resist some of the beautiful, beaded jewellery (I limited myself to a bracelet and necklace). It's inspiring to see the entrepreneurship throughout the township. A very vibrant economy was evident. 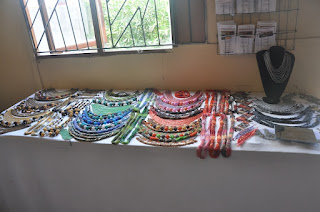 Vicky's Bed and Breakfast was one of the first places for visitors to stay in the township. Although Vicky wasn't home when we visited, Jenny showed us through the "smallest hotel in Cape Town". Her neighbours were a bit skeptical at first, but she seems to be doing a good business. 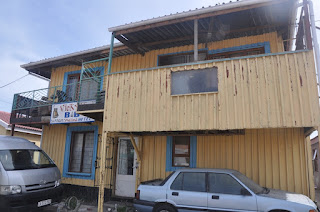 How is it possible to make a difference in a place of such overwhelming need? Jenny has worked hard to be accepted by the community, even speaking what she calls 'baby' Xhosa (the language of most blacks in Cape Town). Everywhere we went she was greeted and welcomed and we didn't feel like we were intruding into their lives. It was heartwarming to feel such an amazing sense of community wherever we went. Most who live here would not choose to move away even though the goats might be munching on their lawn! 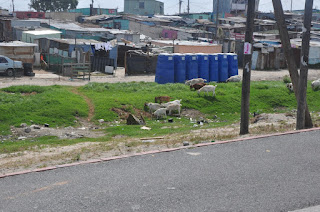