Spending a few days in Paris just isn't enough although we really didn't have much on our agenda except recovering from jet lag which I managed to do by sleeping from 6 pm until 9 the next morning. Even though our hotel was directly outside the large train station Gare de l'Est which was non-stop all hours of the day and night.
We climbed the almost 400 steps (narrow, winding) to the top of the Notre Dame bell tower (think Quasimodo) to enjoy the panoramic view of Paris. The largest bell has a clapper that weighs 500 kg. but it doesn't appear to be used now.
A boat ride on Le Seine (partly to recover from the climb) and then after dinner over to the Eiffel Tower for a brief but spectacular light show. 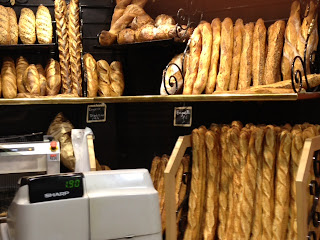 Only a fraction of what was offered at this little shop.  I had the pain au chocolat (surprise).

Marvelling at the incredible array of bread, baguette, pastries, at every little corner or patisserie - very common to see people just walking down the street munching their fresh bought baguette. 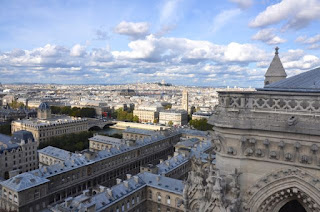 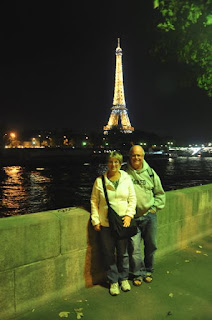 I couldn't leave without this shot.

So far our attempts at getting our phone working with a French SIM card have been unsuccessful - made tres difficile when you can't speak the language. Oh but I've already hired a teacher and have my first lesson on Monday.
We've arrived at our little village of Prayssac and are still trying to figure out what we're doing here and how to do it!  There was a bit of an issue with the rental car yesterday but we managed to get one.  And of course, no one told Ross that to put it in reverse you had to lift this little thing under the gear shift up while you shifted (okay it's been awhile since we had a standard!) but we got through it and I didn't have to push the car back onto the road from where he'd tried to make a u-turn!
I've always been the type to not be afraid of putting myself in new situations but I may have gone overboard with this trip - everything is a new adventure, a new way of doing things and of course the French have a different word for everything as Steve Martin said. I just hope Ross manages to keep up with me!
at October 04, 2012