On Cathy's suggestion (the owner of the house we are renting) we meandered our way past the small town of Gourdon (about 30 km from Prayssac) to visit the caves.  The mist of this morning gradually morphed into a bit of a downpour but by the time we reached Cazals for lunch it was sunny and warm.  Our 4 course meal (soup, salad, plat du jour, dessert or fromage) included a carafe of red wine for 12 euros.  We thought it was a pretty good bargain, even if we didn't know what the main course was when we ordered it.  It turned out to be roast lamb and was quite tasty. 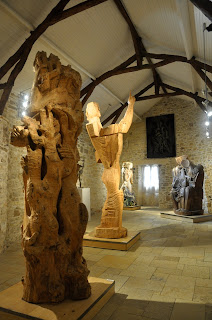 Along the way we also stopped at Les Arques which is a small town made famous by the book I recently read called "From Here You Can't See Paris" and at first glance the town appeared completely deserted. We parked the car and got out to walk around a bit although there really wasn't much to see.  I had read about the famous sculpture Zadkine who lived here and the restaurant described in the book.  All we could see were some closed up old buildings.  Shortly, Ross was approached by a man (the only person we saw in the whole village) who directed us to the museum where Zadkine's art is on display.  Most of the sculptures were bronze but he did some in wood as well.  The ones in the forefront of this photo are from single trees.  He was very influenced by the cubist style (think Picasso). We eventually found the restaurant - fermé mercredi and jeudi unfortunately.

We managed to get to the caves in time to join a tour just starting.  Although caves aren't my favourite place to spend time I was absolutely amazed by this one.  It includes some of the oldest prehistoric paintings dating from 25000 to 14000 years ago.  But even more impressive was the display of stalactites and stalagmites. The entire ceiling and much of the floor was covered with thousands, if not more.  We weren't allowed to take photos in the first cave where the paintings were and below is actually a photo I took of a postcard but it gives you an idea of the extent of them. 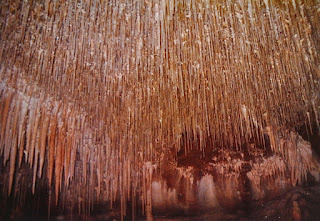 In the second, much smaller cave, we could take photos and this shows the formations where the stalactites and stalagmites join to form columns.  In some places the formations were up to a foot or more in diameter. The ones in this photo were about 4-5 feet high but very narrow. 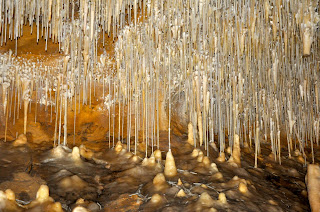 And this photo looking straight up at the ceiling. 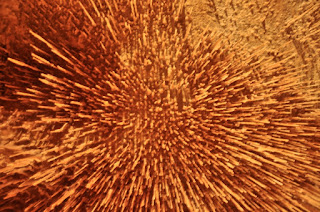 There are quite a few of these types of caves in this part of France so I might just include more on my agenda.
[According to Wikipedia stalactites grow an average of 0.13 mm/year]
at October 10, 2012