Food is an important part of the travel experience wherever you go.  You mostly want good, inexpensive, available food.  In this part of France food is much, much more than that.  Three course lunches are in the12-14 € range.  Dinners can be 20-35€ for 3-5 courses.

There are several foods that define themselves as being specific to this region (Midi-Pyrenees).  Of course, there's the Cahors wine (dark, full-bodied), but there is also duck, foie gras, walnuts, cabécou cheese, saffron, tourtiere and truffles. There are other specialty foods, such as figs and melons, but they are available in many places.

Saffron (spice) - extremely labour intensive to harvest, everything is done by hand; the flowers are just being picked now; made from part of the crocus flower which blooms in the fall; the farmer we talked to and his wife do all the work and make saffron products such as chutneys and honeys; we purchased 0.1 g for 3.50€ (which translates to 1 kg for 35 000€). Too bad we missed the saffron festival last weekend in Cajarc.

Walnuts - we saw a lot of them just beginning to ripen when we came, the husks were starting to open.  Still not sure how they harvest them but I think they just pick them up off the ground.  Some had even fallen by where we park the car.  We bought one of the small sacks at the nut festival - 2 kg for 7€. 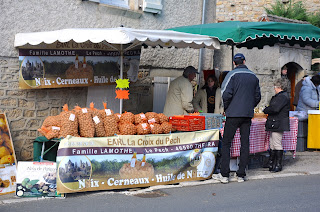 Foie Gras - duck liver paté - creamy, buttery, tasty but ethically difficult to swallow.  Ross has had it a few times at restaurants but it's extremely expensive.

Duck - boy do they love their cooked duck around here!  It's on every menu and we've had it a few times; not my favourite but it's okay; not unlike the dark meat of turkey. I'm not sure if duck is specific to this region or all of France but it sure is popular. I guess they have to do something with the ducks after they remove that liver.

Cabécou Cheese - soft, young, fairly mild, goat cheese; they come as little round pieces; very often served as a course between the main and dessert or just served for dessert; one little round piece is about €0.70.  I've also seen little round white chocolate cabécou - a tourist item!

Tourtiere - these are not the Quebec meat pies you might be familiar with but are apple tarts made with phyllo pastry brushed with sugar and cinnamon;  there are many of them for sale in the market and l'homme that we bought ours from informed us they were made by 'ma mere'. Very tasty. 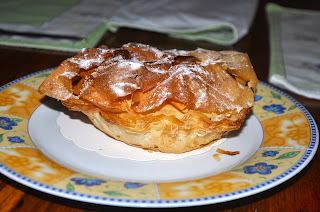 Truffles (the mushroom not the chocolate) - we'll be gone by the time truffles begin appearing in December so we haven't seen any or tried any.