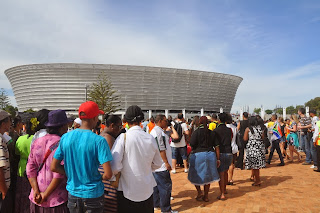 It has the air of festivity that a soccer (football) match might have - people carrying flags, dressed in shirts blazoned with the same name, lots of groups singing as they walk along - and it is a celebration, a very special memorial for Mandela, taking place in the Green Point Stadium in Cape Town today.  Our apartment balcony faces across the street to the stadium and early this afternoon they started blocking off the roads in front and the crowds started streaming in.

The view from our balcony as the setting sun reflected off the stadium: 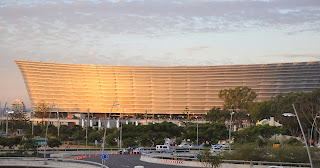 The stadium, built specifically for the 2010 World Cup, holds about 64,000 and all tickets were given away free.  It was hard to find out exactly what the program for the day was but it goes from 4:00 - 11:00 with performers such as Johnny Clegg and Ladysmith Black Mambazo. We can hear bits of sound wafting over the noise of the taxis and vehicles right in front.

They even have their own mounted police. 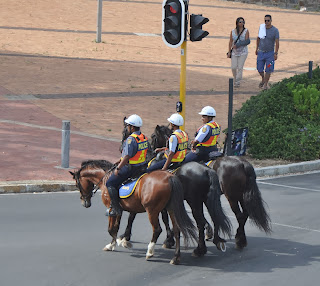 It's hard to imagine that the world will ever see someone of Mandela's stature and influence again. Apparently over 100 heads of state attended yesterday in Johannesburg. As we listen to the sounds of *Ladysmith Black Mambazo singing "Homeless", it's certain that he will not soon be forgotten in a world where 15 minutes of fame (or less!) is becoming the norm.

*Ladysmith Black Mambazo was the group that sang with Paul Simon on one of my favourite albums of all time, Graceland.
at December 11, 2013

Quite an event to travel all the way to South Africa for...!!!!

Lynn, how ‘timely’ that this celebration of life for the miraculous man Mandela was, coincided with your Christmas trip to see your son and daughter-in-law! (Please say hi to Scott from me). And then, on top of that, how lucky that their apartment is just across from the stadium!
Thanks for the description of what you are experiencing (I can feel the energy vicariously through you), and for the photos. I love how the shape of the stadium is the same shape of the traditional hat worn by Zulu women.
I absolutely agree with you that a political leader of Mandela’s compassion and integrity is as rare as hen’s teeth. He was truly a saint. But there was a Gandhi before him, and we have to believe that another example for the world will rise.