Daisy is a tame springbok that roams around the grounds of the lodge we're staying at in Namibia.  She has a tendency to head butt visitors so her horns have been clipped. 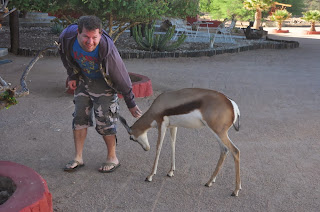 This brave ostrich tried to outrun our car. It may have been possible on these rough roads and 200 km from nowhere we eventually had in a flat tire that Ross and Scott bravely changed.  It's always handy to have a man about when encountering a flat or a big spider! 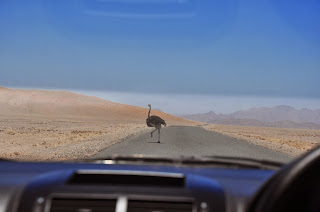 The lodge also has rescued some big cats that were in danger of being shot by the local farmers.  The female cheetah was quite tame although I was a bit shyer than Ross at approaching it. We also went in the cage with the caracals (African lynx) but didn't get close to them, and observed the leopard in its cage. 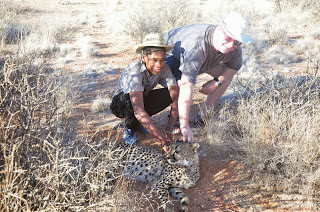 Sossusvlei is an area of Namibia that has the highest sand dunes in the world - the largest over 300 meters high.  We could drive all the way except the last 5 km where we had to hire a 4x4. On the way in we had to stop for a vehicle that had become stuck so our driver helped them out of the rut they had dug themselves in.  The sand on the dunes was quite hot by the time we arrived although we saw a few hardy folk that had climbed right to the top.  We declined that experience. 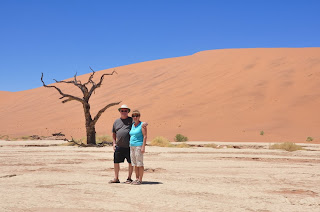 The vlei, or clay pan, is a old marsh area that has dried up - without any water the acacia trees didn't just die and rot but petrified which makes them look quite eerie. The contrast between the orange dunes, the black trees, white salt pan and the blue sky was quite striking. 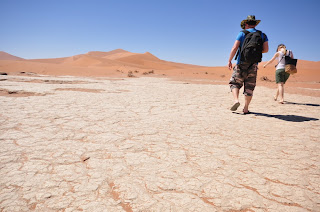 Again, we saw quite a few animals including our first zebra.  It may appear that it is chasing this oryx but Scott thinks they were perhaps just running from a common predator. 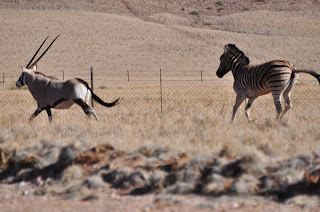