Rome - In which Ross's hat makes a break for it

We arrived to a very hot and sweltering Rome on Saturday.  The 2 bdrm apartment we rented on airbnb is quite roomy - huge bedrooms, 2 bathrooms, big living area and kitchen with everything except a toaster and air conditioning. We're about 10 mins from the Vatican so on our way to find the hop on hop off bus on Sunday we noticed a large crowd starting to gather by St. Peter's square. Alanna approached one of the security guys who mentioned that the crowd was here to hear the pope speak at noon. So we decided to come back after the tour and joined a few thousand others as the pope gave his sermon in Latin then Italian. 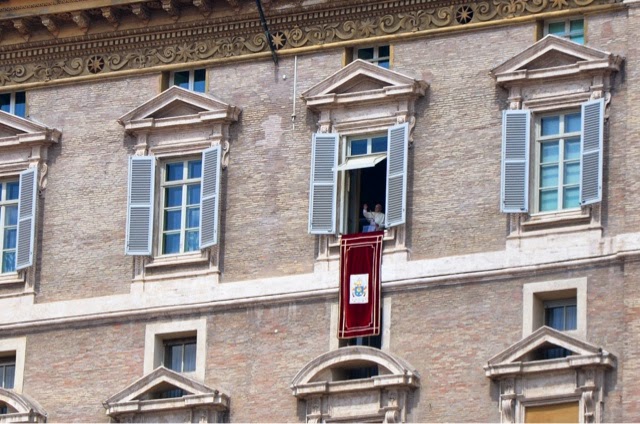 When the Romans built the colosseum 2000 years ago I can't imagine they thought it would last this long. Only an earthquake in 1349 managed to down part of it.  The first few hundred years after it was built saw lots of death and violence - animals, gladiators, Christians.  We joined a tour but it was really a waste of time as the guy just droned on for about 30 minutes then we wandered by ourselves.
We dodged a couple of thunderstorms in the morning that really cooled things off but you can see it got quite sunny by noon, 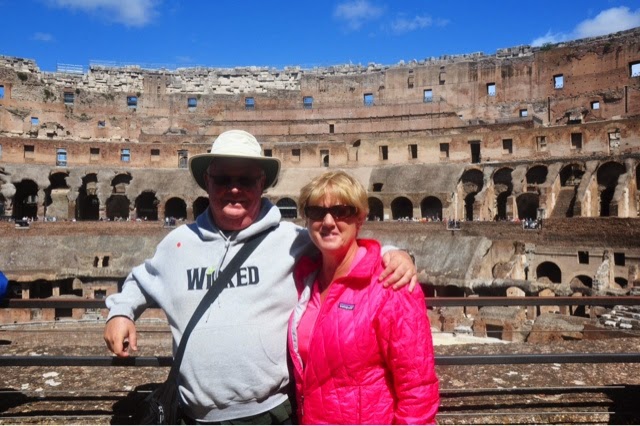 Most of you would recognize Ross and his Tilley hat - he's quite attached to it and they are inseparable in sunny situations.  Well today we ended up in a slightly different situation.  We had just ended the 'tour' on the 2nd level of the colosseum when a rogue gust of wind blew it down over the edge into the middle of the ruins. He raced down the nearest flight of stairs and proceeded to search high and low for his hat.  Well he didn't look quite high enough as it had come to rest on a small ledge half way to the ground. And there was no possible way to retrieve it! Meanwhile Alanna, Garry and I couldn't stop laughing although Ross was still in shock. He stood there looking, almost pleading - all of a sudden it broke loose and wafted gently down in front of us.  One more Tilley (and Ross's scalp) saved!!!
You can see it up about 20 ft on this ledge. 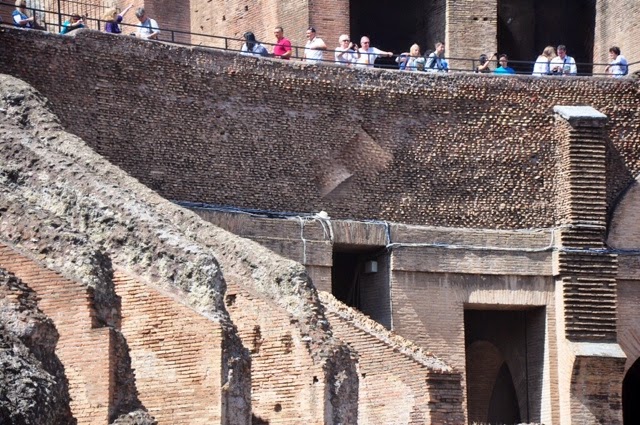