Elephants are the most amazing creatures and it's certainly not the first time that I've blogged about them (or last?).

Today we visited the Elephant Park which was more than an hour's drive from our hotel. Driving here, as you may know, is a combination of luck, skill and an acute awareness of the unwritten rules of the road.  With endless scooters and motorbikes, very narrow roads, and people pulling out or turning directly in your path it's a continuous game of chicken. But somehow, to my total amazement, it all works smoothly and everyone gets where they're going!

First thing at the park, we were treated to a fabulous buffet lunch, then a long bumpety ride through the jungle on the elephant. Rollie described it as rock'n'roll, our guide suggested it was a good massage. These are Asian elephants from Sumatra as they are not native to Bali, but the park has about 31 altogether. Not as big as the African elephants we've seen previously. 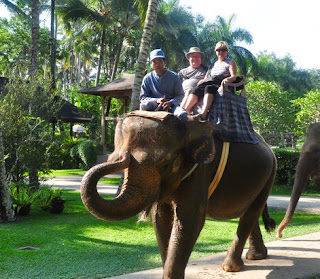 Of course our elephant needed to cool off in the pond for a spell. 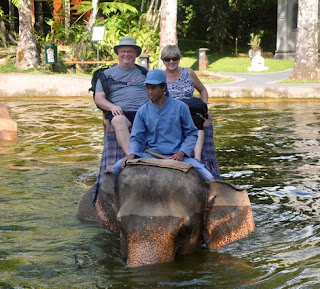 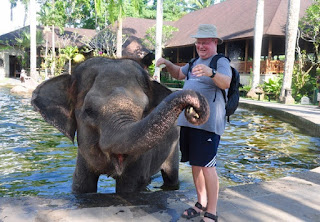 The show afterward had the elephants playing harmonica, basketball, soccer painting and just sitting around on the bench. 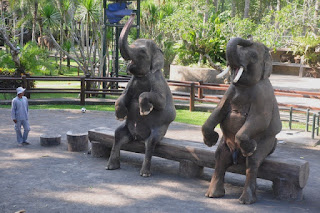 I'm not sure it's because of the volcanic ash that has grounded Australian tourists, the Paris attacks that have affected European travel or just the time of year but it seems pretty quiet tourist-wise here. Along the beach at night we can wander by countless empty restaurants and there were only a few others at the Elephant Park today. Good for us, but not so much for the Balinese economy.
at November 20, 2015