Monkey Forest - in which Ross's hat is saved again

They warned us before entering the monkey forest that we should take off our glasses for fear that the monkeys would take them; little did we know Ross would be fighting off the monkey from taking his hat!
Just look at that cute little mother with her baby: 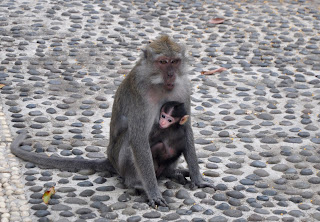 Although there is a monkey forest just a few blocks from our Ubud hotel, apparently the Sangeh Monkey Forest we visited is a bit more relaxing. There are about 1000, mostly cute, macaque  monkeys, some giant fruit bats and a very high pressure sales pitch by the guides at the end which I managed to avoid with our guide saying "Yes" and me saying "No" several times in a row.

Suddenly one jumped up on Ross's back and had a death grip on his hat.  Fortunately with my quick reflexes I managed to get couple of pictures before Mel helped get him off. 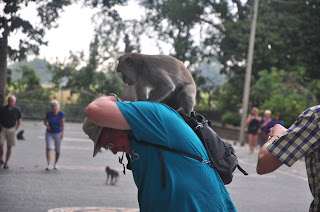 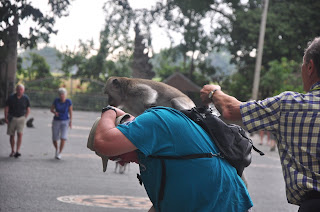 Ross was unscathed except for the trauma - both from the monkey and knowing that I was more interested in getting the photos than rescuing him!