Our last few days in Bali were pretty exciting.  First we went to a temple (yes another one!) which was perched high on a hill over the ocean. The monkeys at this temple were a bit aggressive and we were again warned not to wear anything sparkly - earrings, watches, glasses, etc. We were fine, but the tourist in front of us had his glasses stolen by a very tricky monkey - as we looked to the left at the monkeys climbing the cliff, a monkey hidden in the tree above just reached down and grabbed them. He chewed on them for a few minutes, broke off both the arms, then tossed the lot onto the ground. Ross grabbed onto his hat and glasses a bit tighter after that.

The temple also had a dance/music presentation called Kecak Ramaynana and Fire Dance - 55 bare-breasted men chanting and creating vocal percussive rhythms with movement. It really reminded me of Polynesian dancing. There was a bit of a story with a golden deer, a white monkey, a giant, burning grass fire and some mythical characters - viewed while the sun set over the Indian ocean. Quite a spectacular setting. 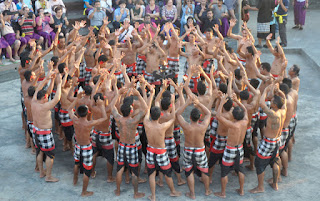 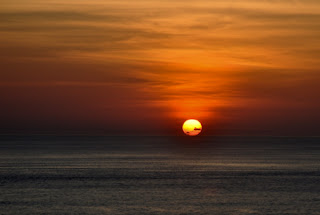 Dinner was at Jimbaran - 24 restaurants on the beach - tables as far as the eye could see as the waves broke over the sand.

The last night's dinner was pretty impressive too - the menu they had on the table was a list of about 30 items - which at first we thought we would select from, but no, everything arrived, including the entire spit-roasted pig. Scott and Sam joined us (it was Scotty's birthday!) and someone had ordered birthday cake since we obviously hadn't had enough food already! 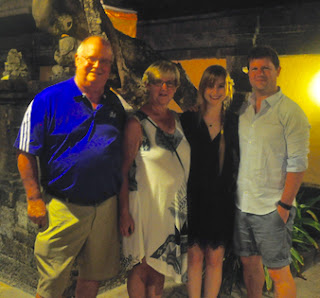 On Thursday night we said goodbye to Bali and landed in Sydney where the temperature had gone from 39 on Thursday to 17 on Friday morning. After the humidity of Bali it was a GREAT relief to be able to go outside and not be totally uncomfortable. It's now Monday and Mike and Liana have just arrived from New Brunswick. Here's the view from our apartment - if you've been to Sydney (even if you haven't) you may recognize the opera house and the bridge in the distance. 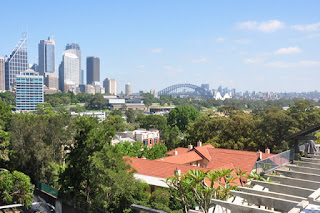 Sadly, we've been here for 4 days now and haven't seen a kangaroo yet! Maybe tomorrow.