Offerings to the Gods

Our first full day in Bali was really a crash course in the Hindu religion. Although Indonesia is mostly Muslim, Bali is 90% Hindu. Everywhere you look, there are temples and offerings that have been made to the gods to express thankfulness and gratitude. The offerings are small baskets of (mostly) fruit, cake, incense and flowers. They are all along the sidewalks and all over the two major temples we visited today. Every home has a family temple, every community has several temples, there are public temples and temples for specific purposes. Before entering we had to don a sarong. Scott joined us for today's tour. 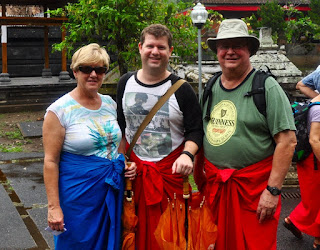 Our first temple, Goa Gajah or Elephant cave, was excavated in 1954 but has been dated to the 11th century. The 2nd temple was Holy Spring temple which is a purification temple. People were bathing in the springs.

Today was a special religious day - I believe it was the new moon.  School children we saw along the way were in traditional costumes and many of the community temples were busy.

We then started our way up the hill toward the Mount Batur, an active volcano.  On the way we stopped at a coffee and spice plantation. The restaurant there offered many different varieties so it was nice that they offered the sampler which included 14 varieties of tea and coffee. We didn't try the Luwak coffee - I think it's just a joke the Balinese are playing on the tourists! 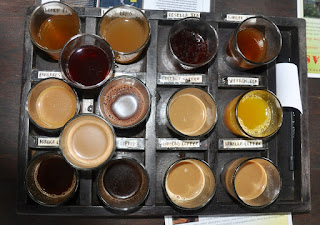 I think the rainy season started here today. Or maybe last night with 2 huge claps of thunder - louder than anything I've ever heard in Vernon. It took about 15 minutes for my sunglasses to 'defog' after leaving our air conditioned room this morning. The rain continued off and on for part of the morning but it actually cooled things down as we headed up toward the volcano. Perhaps we need to make some offerings to the sun god! 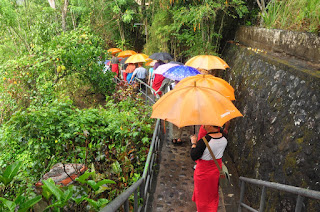 Mount Batur last erupted in 1968 and is surrounded by two concentric calderas. At 1700 meters it's not the highest one on Bali but definitely the most active. The dark line you see part way up the mountain in the picture is the black volcanic rock. 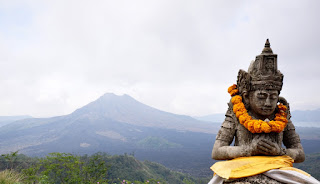 The most overwhelming impression here is of overcrowding, the roadsides are filled with shops and huts that seem cobbled together. There are very few open spaces which is to be expected in an area similar in size to PEI with 4.2 million people. We did stop at this lovely viewpoint of some rice terraces. 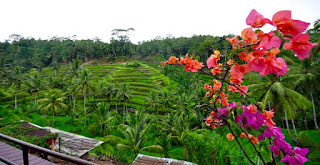 The hotel in Ubud is lovely - the staff are super-friendly (actually most Balinese are) and our ground floor deck leads down to the pool. 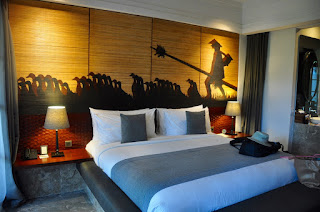 They left us some snake skin fruit to try - kind of tastes like apple/pear but a very thick scaly skin. 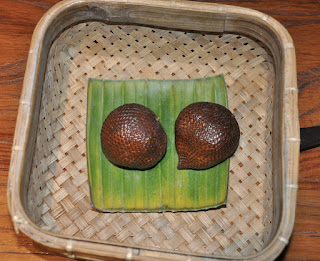