We had such a fabulous apartment in Sydney we were all a bit disappointed when we had to pack up and leave for Palm Beach. I did manage to gather the group for a photo on the deck before we left. 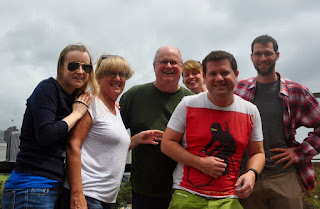 While in Sydney, Ross and I did the requisite hop-on hop-off bus, then Mike and Liana joined us a few days later for the hop-on hop-off ferry around the harbour. This gave us an excellent overview of the entire area, from Bondi Beach to Manley. Also did a tour of the opera house which took 14 years to build and went massively over budget ($7 million to $102 million). The tour focussed a lot on the architecture of the building which, as you know, is unique. Construction started in 1959 before they had any idea of how they would put it all together. Obligatory tourist photo: 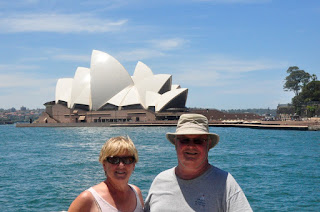 Palm Beach is kind of the holiday or weekend get-away area for Sydney-ites (is there another word for them?). It is situated on a narrow peninsula just an hour or so from the city and dotted with beautiful beaches on all sides. Lots of surfers around here and dangerous waves/currents that often require beaches to be closed. We're staying in a lovely house with amazing birds in the backyard. It's a bit jarring to be woken up to sounds I've never heard before. As well as the kookaburras that come and sit in the gum tree, yesterday there were three of these beauties enjoying the pink flowers. 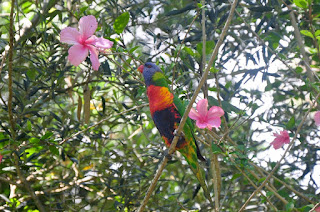 We saw these black ones (ducks?) with the yellow and red beaks in Sydney: 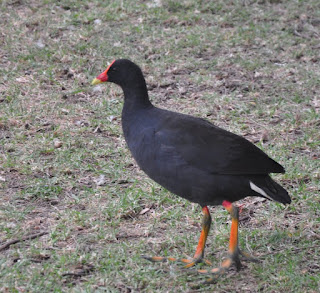 Long legs and a yellow beak. 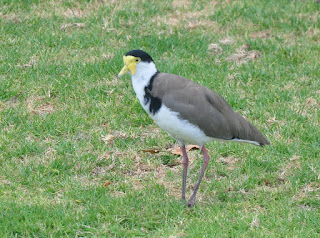 I'll have to consult our local guide to get the correct names for these and I'll add them later.

Tomorrow we head to the Hunter Valley for a few days, one of many wine growing regions here. If you don't see any new posts perhaps it's because I'm too busy testing the wines!