Most Liveable City in the World

Melbourne is apparently number one (then Vienna and Vancouver) and it's no surprise. Not only has it got a lot of interesting architecture, green areas, free trams, great weather, a giant Christmas theremin AND the largest LEGO Christmas Tree in the southern hemisphere. 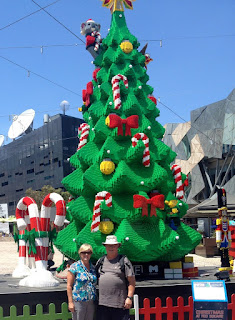 This is our final stop in Australia and we're enjoying every last minute of it. The day after we arrived we had an all day tour of the Yarra Valley which produces a lot of Chardonnay, pinot noir and sparkling wines. The first winery we visited was Chandon, known for their French champagnes. The day included a few more wineries (lost count), a cheese tasting and a beer/cider and tasting.
Nadine organized the tour and she and her mom helped give a toast to the morning: 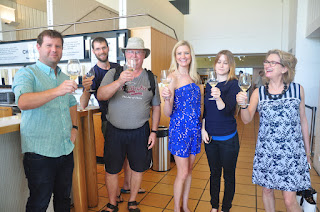 On Wednesday we ventured over the Yarra river (which divides Melbourne) to the main shopping area - first stop Hopetoun Tea Room - very famous for their cakes (one slice of chocolate/fig tart)! 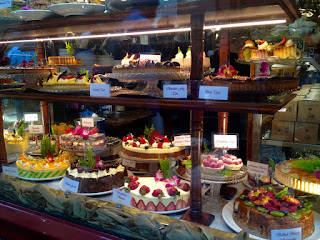 Then a Circle Tour on the free tram which takes you around the outer rim of the Central Business District (CBD) with a recorded commentary describing some of the history. Melbourne has an eclectic mix of extremely modernistic architecture combined with grand 19th century structures - all of them very visually interesting. Lots of little laneways brimming with shops and restaurants. Many coffee shops that Scott has been checking out.

We had dinner at St. Kilda (a beach area just south of the city) then went to the pier in the evening where there is colony of penguins that climb onto the breakwater at sunset. They are very small, in fact they're called Little Penguins or Fairy Penguins - about the size of a large pigeon. It was too dark to get any decent photos.

The Melbourne precinct (area) we're staying in is the 'arts' area and there are many galleries, theatres and art schools within a few blocks of here. The exhibition at the National Gallery of Victoria is by Andy Warhol and Ai Weiwei - a Chinese activist and artist. Both very iconic contemporary artists with a good sense of humour (necessary for most modern art).

This sculpture was created by Ai Weiwei with 1500 "Forever" bicycles. 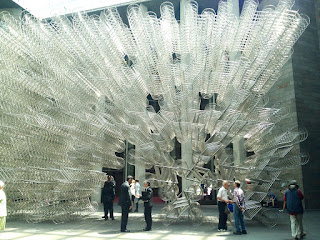 Heat waves are hitting many areas of Australia with temperatures expected over 40 in some place and it's a bit strange to hear "Let it Snow" in the middle of summer. However snow is starting to enter our consciousness as our departure date nears :(
at December 17, 2015

It's too bad the link doesn't have a recording of the sound from the theremin. Weird name Do you know what it means They had a smattering of snow in Vancouver today, while here it was crisp and clear We finally have about 3 inches of white stuff plus hoar frost It is beautiful. Enjoy your last few days.

Yeah I should have taken a video of the sounds. Named after it's inventor Leo Theremin - I recently read a fictional book about him called "Us Conductors" - you should check it out.