I keep having to remind myself that without tourists paying exorbitant prices, Venice might not exist. It's the only thing the economy here has to keep it going but they (we!) certainly make it challenging. Marj and I became part of the 30 million that visit each year and with a few cruise ships in town every day it is particularly crowded. 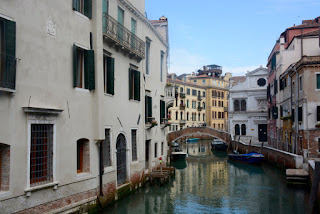 Our arrival in Venice was without incident, except for the fact that we couldn't contact the owner of the apartment we rented so she could meet us since Venice doesn't really have addresses and even if we had an address the chance of finding it was next to none in the maze of streets. For some reason it didn't occur to her that we might not have texting capability despite us telling her that, so after we figured out how to get the Alilaguna (water bus blue line) from the airport to Venice, then the 5.2 vaporetto (local water bus) to the closest stop we stood on the dock not knowing what to do.  We had a phone number, but no idea where a public phone might be. Luckily, we stopped a local who spoke a bit of English AND offered to phone her for us and eventually her mom came to show us the way. It's always the last bit of travel that presents the biggest problem.

Friday we got our bearings a bit, found a SIM card/data plan for my phone so we could use GPS to prevent us from getting hopelessly lost, and met Tamy, the guide from our last trip (who we hoped would also be our guide for this trip) for a drink. She assured us that our guide this time would be just as good! 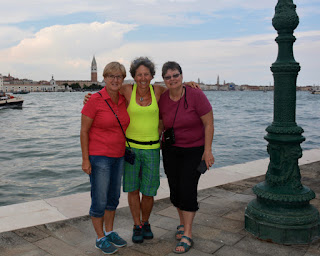 At lunch we tried the the local specialty that hordes of people were drinking - spritz - made with prosecco, bitters, and soda, with a slice of orange. Not Marj's cup of tea but I managed to down mine. Go figure. 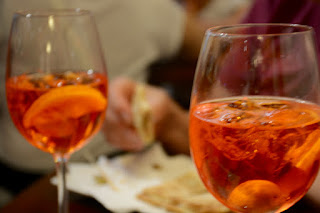 Saturday we figured out the water bus system (one set of numbers goes clockwise around the island, the other counter-clockwise) and rode the vaporetto up and down the grand canal, over to Lido (another island) and back again. It rained a bit in the morning but it was a good day to spend on the water. We actually met quite a few people who were just riding the vaporetto around town - it's a good way to see most of Venice and with our 3 day passes it was kind of like a hop-on hop-off.

Later Saturday we checked into the boat, the Ave Maria - our hotel for the next week. This boat is significantly larger and newer than the one we were on 2 years ago.  There are 32 guests and several crew. A large German group makes up about 1/2 the group, with several Brits, a couple of Aussies and some folks from Oregon.

The dining area ready for dinner: 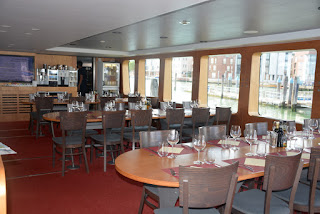 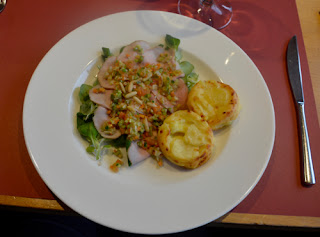 topped off with an apple filled pastry and pineapple sauce. 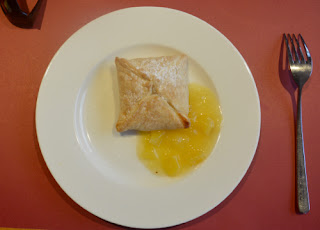 (Don't worry - I'm not posting pictures of every meal!)

Good thing we're biking during the day! With my requisite daily gelato serving and such fabulous food on the boat it's going to be a challenge to keep the weight gain to a minimum. Yeah right.
at June 05, 2016

Oh goodie! Now I can travel some more. And PLEASE post photos of every meal - it gives me ideas. Grant would love that apple thing with the pineapple sauce. The ravioli looked scrumptious! Have a wonderful time! :)

Heyyyyyy, I saw myself in one of the pics!!!!!
Have a great time girls and I do hope we get to make another trip together!
Big hug,
Tamy