Turns out we didn't need luck to get here - instead we had Erika, one of the boat's chefs, who was also taking the train to Verona.

The crew on our boat was really top notch - they all seemed to share in the duties of keeping the guests happy and the tour working smoothly.  Our guide Hein is actually one of the owners, and he'll do the voyage several times a year, usually not scheduled; the scheduled tour guide has a paid holiday for the week. I really enjoyed his guiding style - never pandering or giving us too much information. He never counted to see if we were all there, he just assumed we had enough sense to get to where we needed to be. He worked as a physicist for the UN and the World Bank, speaks 9 languages and has lived in many different countries. He always had interesting anecdotes to tell us. Saturday morning was time for goodbyes and everyone went their separate ways.

For our last night on the boat, our dessert was rose cake (a local specialty) with zabaglione sauce, a recipe from our captain Ricardo's grandmother. 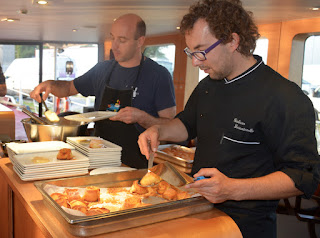 Verona's main claim to fame is the fact that Romeo and Juliet took place here.  In the centre of town is a little square that purports to contain the balcony she stood on although in actual fact the balcony was added in the 20th century.  Never let facts get in the way of a good tourist trap. The crowded little square was jammed with tourists and for a fee you can even go stand on the balcony. We passed. 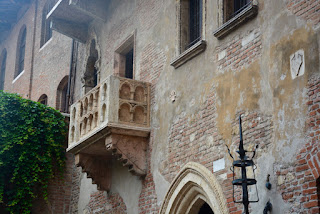 Verona itself is a lovely town - our spacious apartment is just across the Adige river (2nd longest in Italy after the Po) from the main village square and it feels like we're far away from the crowds of Venice. 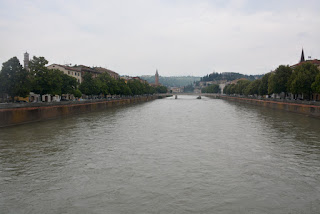 Our apartment has the fanciest shower I've seen - inside the shower is a light, fan and radio. Plus you can have the water coming from the top or sides (if you can figure out which buttons to push).

There is a large Roman amphitheatre in Verona used for concerts, fairs and operas. In the middle of town there are some underground ruins that have been exposed and there are several large piazzas. 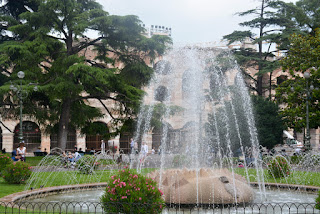 Like most places in Europe they take their pastries pretty seriously. 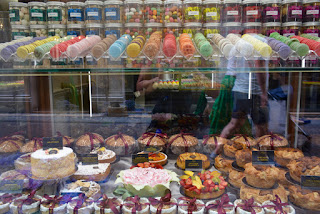 We were pretty exhausted after getting off the boat so our Saturday consisted mostly of walking a bit, and napping.  Today we found a lavindaria (laundry) half a block away, and after some Google Translate help, managed to figure out the washers and dryers.  Seems like a good activity while the rain lasts - supposedly stopping this afternoon.

We found a little place to have a lovely dinner last night. 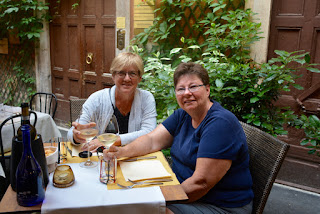 very nice picture - just got home so I am late reading all this..