The last couple of days we've been travelling through the valley of the Po - a very rich cultural and agricultural area. The Po River is the longest river in Italy, although technically our boat has been on canals near the Po. For political reasons, no dredging is allowed on the Po, so consequently there is no river traffic. After disembarking each day, we bike to the dikes by the Po, then later make our way back to the canal where the boat is moored.

Last night's storm (we just made it back in time) fizzled out by morning but there was still some concern about today's weather.  And it turned out to be my favourite day yet.

First the cheese lesson.  There are 2 types of cheese exclusive to this region.  One side of the Po produces parmigiano reggiano and on the other is grana padano.

We stopped by the grana padano factory and, although we weren't allowed into the production area, had a look at the storage facility. 1000 litres of milk produces 2 cheeses (rounds).  Each round is worth about 400 Euro and is purchased by speculators as soon as it's ready. We estimated about 30,000 cheeses in this one facility. 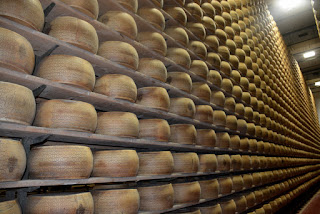 Twice a week each cheese needs to be turned, all automated. Cheeses are ready after about 8 months and the quality and taste will depend on the time of year it was made. 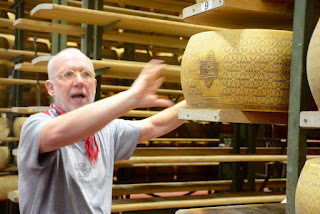 It's quite an insult to the cheese maker to grate Grana Padano - only the discard cheese would be grated.  Instead use a special grana padano knife to break it into pieces.  The tasting included 10 month cheese and 3 year cheese (with red wine of course). After 3 years the salt crystals begin to form and it's not much use (except for grating perhaps and maybe selling in Canada!). The 3 year cheese was selling for about 18 Euro/Kilo. 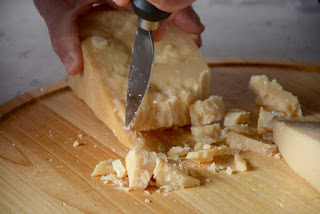 The next stop was a museum in the small village of Bergantino. In this village, in the 1920s, a couple of men decided that a good way to make money was to build amusement park rides where customers would have to pay up front.  Today this village produces 80% of the world's carousels, ferris wheels, roller coasters, etc. The museum had a display of old mechanical musical instruments, such as the piano that also had a drum, cymbal, and various other percussion instruments, activated by a cylinder, much like a player piano. 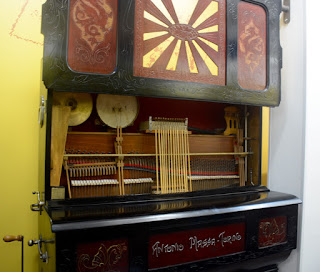 There were many models of amusement rides. 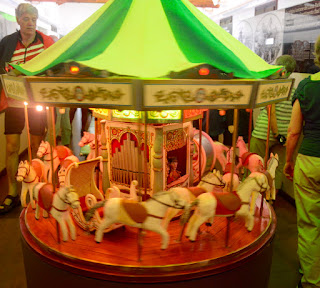 We also visited a cat refuge (I guess this was for Marj's benefit) and a castle owned by the Gonzaga family.
at June 09, 2016