Inuvik.  Not Iqaluit. Or Inuktitut. Or Nunavut.

Inuvik. In the Northwest Territories. Above the Arctic Circle. That's where I ended up this week to give a presentation to teachers about online learning, specifically Moodle (the online learning platform that I've been working with).

Inuvik. 4500+ km as the crow flies from the place we just spent the past 6 weeks - St. Andrews New Brunswick.  There likely are 2 points in Canada that are farther away from each other but not many.

Inuvik.  No polar bears. No igloos. But a community garden greenhouse.  Check it out on Google maps street view - you can go right inside.  It used to be the arena.

And how do you get there? Well we started from Kelowna on Friday night with a direct flight to Whitehorse. Surprisingly this is one of the few domestic flights I've been on that actually provided food - a nice little plate of cheese, grapes, sliced meats, warm chocolate chip cookie - thanks Air North! Unfortunately the flight was delayed coming out of Vancouver (stormy weather!) so we didn't arrive in Whitehorse until about 2 am. 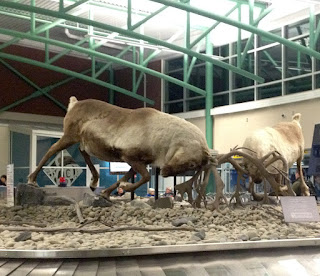 At the Whitehorse airport baggage carousel: display of 2 elk in death lock

Spent Saturday in Whitehorse with not much to do - grabbed a transit bus downtown, wandered a bit, ended up at a tour of the Yukon Brewery - motto: Beer worth freezin' for.  They also have some distilled spirits which we got to try, along with 8 different beers.  My favourite:  Lead Dog - an ale that's almost like a porter. 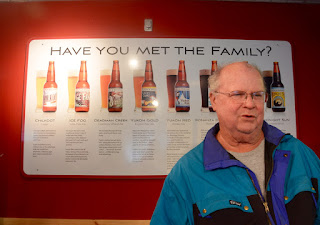 Ross in his happy place.

Then bright and early for the flight to Inuvik. Well early, but not very bright as the sun didn't make its way up until well after we'd departed at 8 am. Room for about 40 on the plane but only about 1/2 filled.  Rush seating. No security check. 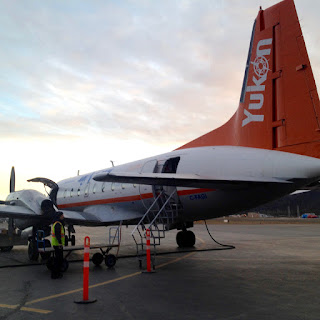 Started snowing in Whitehorse just before the plane departed. First stop Dawson City - we all had to get out so the plane could refuel. 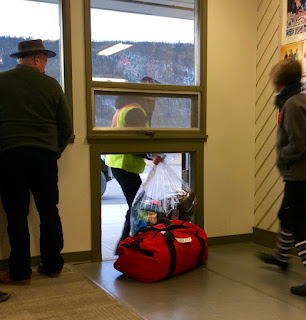 Next stop - Old Crow - again everyone out for refuelling.  Then the last leg to Inuvik.

Inuvik is actually one of the larger centres in the NWT with a population of around 3500. It's the terminus of the Dempster Highway - about 750 km from Dawson City. It's situated on the McKenzie Delta - on the east channel.  From the air there were a lot of lakes with quite a few rivers snaking their way through. Soon the river here will freeze over and it will be converted into a road that goes to Tuktoyaktuk. 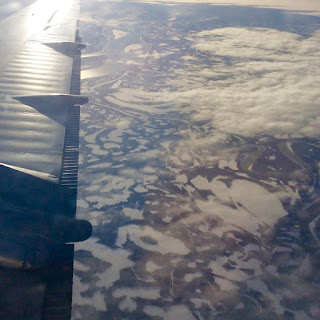 Temperature here today: -5 (with a bit of wind) and about an inch of snow - a lot less than they often have this time of year. Lots of sunshine today - although the sun only makes it half way up the southern sky it didn't set until about 6:40. Ross and I bundled up (scarves, toques, gloves, etc) and headed out, walking to a restaurant in the town about a km away.  Since I'm writing this now you know we survived! Actually have to get up in the morning and head to school to work. Yikes.
at October 16, 2016