Driving over the Botswana border in our rental car was a bit of an adventure. First we (and by we I mean Scott) had to go to the police station in Vic Falls with the guy from the car rental company in order to get permission to take the car out of the country. When we got to the border more forms had to be filled out for both us and the car. A fee for driving on the roads needed to be paid and in order to get back into Zimbabwe we had to pay an additional $75 US each (which we'd already paid once at the airport). Apparently Canada charges the Zimbabweans exorbitant Visa fees so they are retaliating!

Our lodge was located in the small town of Kasane which is just a short drive from Chobe National Park. The first morning we had scheduled a game drive to start at 6 am. Unfortunately it was pouring rain most of the morning so the animals were not very happy to come out that early! Probably the most exciting part was before we even left the lodge. As with most lodges in tropical climates, the lobby is open to the outdoors. As Ross and I were waiting for the driver, we looked up to see a hippo approaching the lobby.  Since hippos pose the greatest threat to people in Africa (despite looking kind of cute and innocuous) I kept my distance though managed to take a few pics.

It was still quite dark and the staff shortly came out and 'shooed' him away. He then headed towards our car in the parking lot and likely could have done a far amount of damage if he wanted. 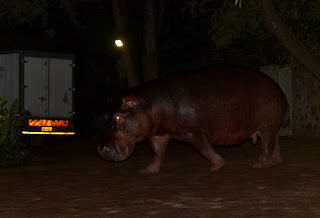 We had a couple of 'boat safaris' on the Chobe river which forms the border between Namibia and Botswana. Our guide pointed out about 20 different bird species; TONS of hippos, and a many crocodiles. The boat driver seemed more cautious around the hippos than the crocs.

This guy is either yawning or threatening us: 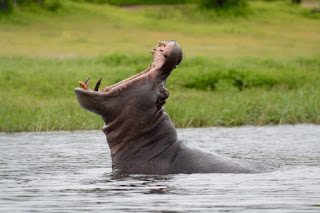 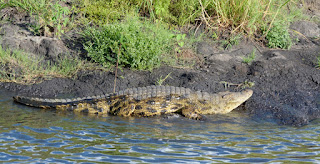 Lots of warthogs (they seem to be a nuisance in town), mongooses (mongeese??) and even an elephant on the side of the highway as we drove in. 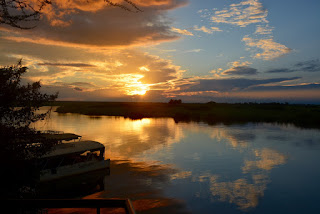