Flying in to the Victoria Falls airport it was apparent that this country has not recently been facing drought. Green and lush, the countryside appeared to be doing nicely. As well, from the air you might be able to see small, round buildings known as rondavals. 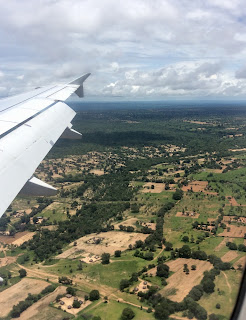 So in order to be that green it must rain a lot which meant our helicopter trip has been postponed indefinitely as it is pouring. Earlier we walked through the park which provides some stunning views. The waterfalls seem to continue forever, almost 2 km in length. The mist was billowing, often making it difficult to see the falls and giving us a bit of a shower. The rain held off until we had finished the hike. 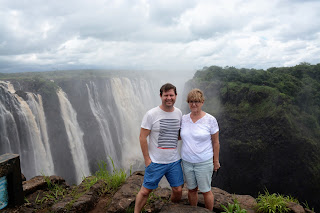 Our hotel is gigantic with many water features. We were advised not to leave our balcony doors open as the baboons and monkeys will enter. So far none have come in! But we've seen a few around, on the road, in the park and, according to Scott, running along the roof of the hotel.

Hi Lynn, As always, I am enjoying travelling with you. We had sound advice while at Victoria Falls, Zimbabwe side. One of our guides said, "If you plan to buy wood sculptures, here is the place to buy them. Good quality and reasonably priced." We took him at his word and are happy we did - all from either the market or from street vendors. I hope that I am not too late in passing on the tip. Enjoy!! Anne