Anyone who has been to Cape Town will be familiar with the sight of paragliders floating down from Signal Hill. In fact the last time we were here we golfed at the course near the stadium and you can see them clearly from there, as they land nearby. At that time I said, "Next time I visit Cape Town I'm going to do that." But I still wasn't totally convinced that I'd do it.

I've always thought it would be kind of cool to try parachuting, to gently glide down to Earth and to see things from a bird's eye view. Except for one small thing - the first step out of the plane. But this should be different and seemed quite doable. I told Scott my plan and he said he'd do it too. It was good to have someone to go with and I'm not sure I would have followed through without him! Ross of course, wouldn't consider it. His fear of heights is too great. Sammy was also having none of it.

So this morning we made the drive up Signal Hill, Sam and Ross were to drive back down and arrive at the landing spot before we did. I was a bit nervous and a bit excited. I even forgot to say goodbye to Ross before they left. Should have at least told him where I keep the key for the safety deposit box!

About 4-5 companies launch from there so it was comforting to see several people go before we did. Watching them it was apparent that the launch, at least, was very easy. The launch area is the same place we had a picnic watching the sunset a week earlier. It's gently sloped and covered with a green mesh with an outstanding view of the city.

There is virtually no preparation as they put your helmet on, strap you in, and tell you to start running. My pilot was Manu, the owner of the company, and he was obviously enjoying the ride as much as I did.  After only a few steps, you're airborne and sit back and relax. The wind was good and we did a few passes back and forth over Signal Hill. It was a beautiful day and the sky really was that blue! 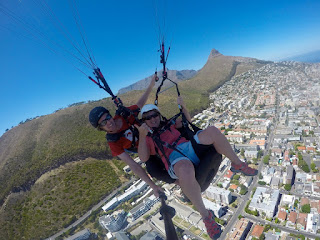 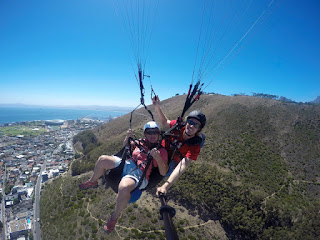 It was so amazing to look down over the city and think that you're really flying above it all. After several minutes we began the descent over the city. 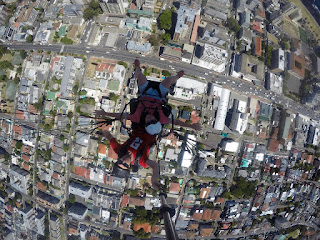 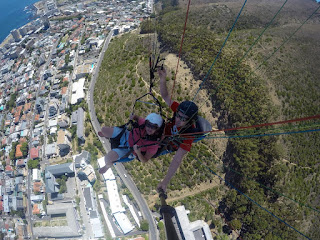 Just before landing they take you out over the ocean and do a few quick turns which provides a good adrenalin rush before the landing. I thought there might be a bit of impact on landing but it was so gentle - they have great control over the chute. 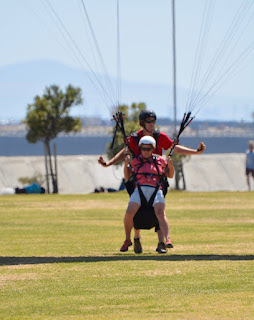 They say the flight can take 5-30 minutes depending on the wind; mine was in the 10-12 minute range but it seemed like a substantial time. I had considered taking my own camera with me but glad I didn't as I could just sit back and enjoy the fabulous view and let the GoPro take the pics. There's also about 10 minutes of video that I may get around to posting later. 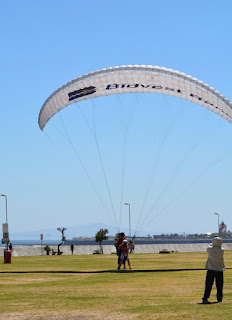 The experience was exhilarating and it took me about an hour after landing to really feel like I was back to earth (literally). The company I went with was paraglide.co.za and, like all of them, are super safety conscious and won't fly unless the conditions are good. Despite what you might think this is a relatively safe activity. You probably risk your life more often on a daily basis than I did today!