The World Masters Games is the largest multi-sport participatory event with 28,000 people from over 100 countries. The inaugural one was held in Toronto in 1985. The oldest competitor is a 101 year old woman from India competing in 100m, 200m, javelin and shot put. She took up athletics at age 93 and her 79 year old son is also competing. There's hope for us all!

I'm not sure if the staff are congratulating us or mocking us: 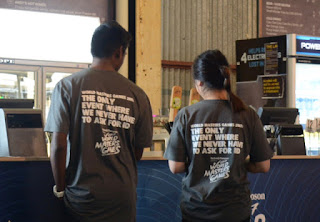 Here are the 3 of us decked out waiting for the opening ceremonies to begin - apparently there are 2000 Canadians here and they were very prevalent. 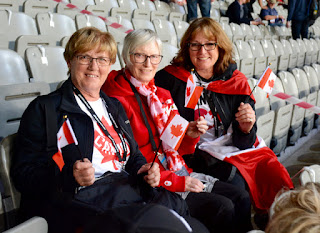 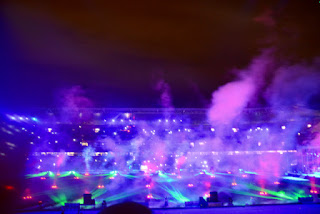 And don't think these games aren't classy - just look at the port-a-potties! 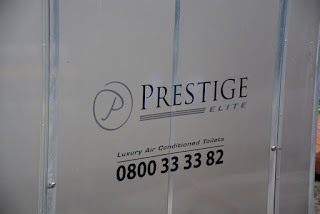 It was pretty cool to see all the people dressed in either team or national colours.

It's quite a big event for the city and much like the Olympics in Vancouver, everyone's in a friendly, talkative, upbeat mood. Of course I don't feel old, but there have been a couple of times in the past year where someone on a bus or train has offered me their seat which has surprised me. However, on the train to the opening ceremonies a gentleman got up to offer me his seat and it just happened to be the mayor of Auckland.

Like many large cities (and Auckland is NZ's largest) there's a "Sky Tower" - take the elevator to the 51st floor (220m high) to get panoramic views of the city. If you look closely at the photo below you can see some 'cables' on either side. That's for those doing the 'Sky Jump' - for $192 you can attain a great adrenaline rush! They hook you up to the cables and you hurl yourself to the ground. 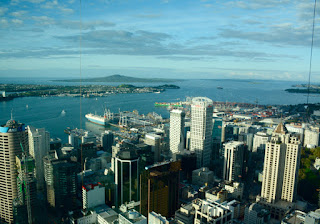 If you look at the photo again, you'll see the island with the volcano poking up in the distance - we're heading there today for a bit of a tour. It happens to be NZ's youngest volcano - it emerged from the sea about 600 years ago.

This will be the first time I've celebrated my birthday not in Canada. My travel companions managed to find a candle (but no matches) and stuck it in a group of NZ fruit - the green feijoa, with some 'gold' kiwifruit (they're not so fuzzy) and an avo.  Thanks Nancy and Linda - I will indeed remember this birthday! 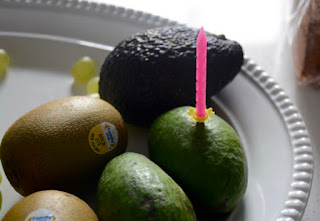