A Walk in the Park

Murawai, Pakuranga, and Akarana. Those are the 3 courses we played and if my golf wasn't that great at least I learned how to pronounce (and spell) the names of the courses which was a bit of a challenge!

Despite ending up somewhere in the middle of the pack (of about 120) the golfing was a lot of fun and all the participants were exceptionally nice. Most were from Australia, New Zealand or Canada with only a handful from anywhere else. One of the Vernon women made it to the final round - congrats to Nancy K.

We've had a bit of time exploring some of the sights Auckland has to offer. It's quite hilly but has lots of nice vistas and tree-lined streets. Many of them have tree-tunnels like this: 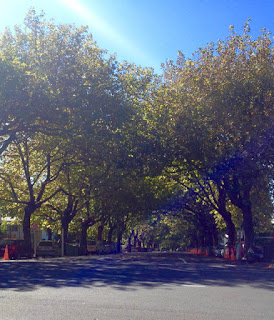 ANZAC day celebrations were on Tuesday (much like our Remembrance Day) which included a fly over with some (I'm going to guess) fighter planes. 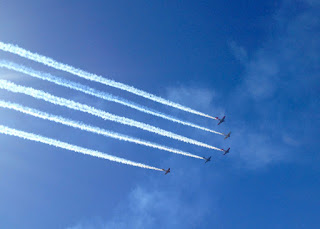 You can tell from the sky colour that our weather has taken a turn for the better. We had 3 glorious days for golfing. Lots of trees and plants are still in bloom on the courses, beside one tee box there was a lime tree filled with fruit. The nicest course was along the west coast at Murawai, although the hole in the pic below might have been the only one that had an ocean view. In the distance you could see and hear the surf crashing against the shore. 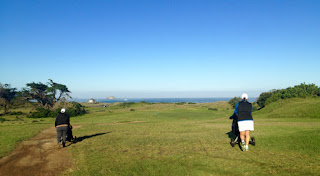 The Masters Games have included lots of amazing culture and entertainment so we spent one afternoon listening to this fabulous jazz group. 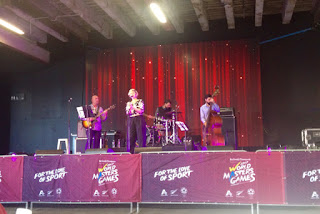 Our ventures into the wilds continued with a visit to Rangitoto - the volcano just off of Auckland. A vehicle pulled by a tractor took us most of the way to the top, after which we climbed the last 300 stairs to the summit. Lots of manuka and kanuka (tee trees) and huge lava fields. 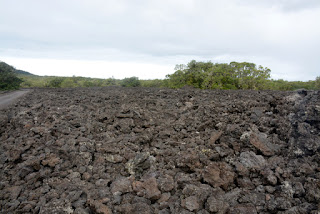 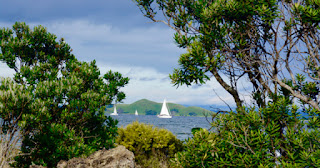 On another day a tour to the west coast with a stop at Karekare falls (the Maori name translated to long silver braid) and the mandatory group photo:

The forests in this area are so lush and dense. We had a short hike through an ancient forest - before entering and leaving the bush we had to clean our shoes and spray the soles with disinfectant. Apparently some teeny spore has the potential to wreak havoc on a specific native species of tree. They are pretty vigilant about all this bio-security. 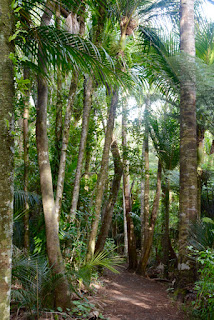 And a walk on the black sand beach at Piha. The beach was very flat with a thin layer of water causing this reflection. 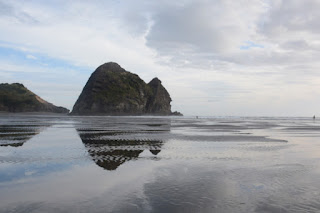 I'm also reflecting on my visit here, with only a few days left. The people have been super friendly and have managed to show us visitors an amazing time. The games were well organized and set a high standard for future games. Thanks to all of Auckland for demonstrating the love of the sport!
at April 28, 2017

I just loved going to virtual NZ with you, Lynn! Thanks for posting the excellent pics of your eventful days and nights and for your great descriptions and narratives.
Rosie

Thanks for virtually coming along Rosie! Soon we may be able to literally travel together.