So exactly what is a glow worm?

I hate bugs. And spiders. And wormy, crawly things.

So what's the deal with glow worms. They are quite literally the larvae of a beetle that happens to have bioluminescence. The reason for their luminosity? To entice their prey.  Yes, these worms are predators - just like lions and sharks!

And still, I went on a tour to see them. Thursday night Cyclone Cook was scheduled to make landfall and a few areas of the country experienced flooding, slips (land slides) and extremely high winds. In Rotorua, things were just very rainy and a bit windy. So on Friday morning we woke to high cloud cover with some blue sky actually poking through - our first since we arrived in NZ. We hopped on a bus for the 2 hour ride to Waitomo where the Glow Worm Caves are. Glow worms are only found in NZ and Australia. Most of this area consists of green, rolling hills, a lot of sheep, cattle, deer, a few ostriches, and horses. I wouldn't have been surprised to see Bilbo Baggins wandering about.

We passed through a lot of small towns that looked like they haven't changed much since the 50s or 60s. This butcher shop is kind of typical of the main streets. 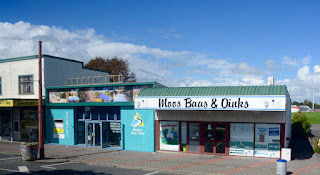 One town had a bunch of sculptures made of corrugated iron. This is one of the smaller ones. 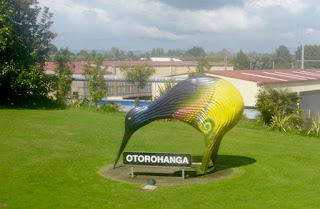 The Waitomo cave itself isn't that large - likely about 100-200 meters - and filled with fat stalactites and stalagmites. Then you board a boat and drift off into the darkness lit only by the light of the glow worms. It was much like looking up on a starry night, with about 10 times the number of lights covering the ceiling and much of the walls of the cave. Since no photos are allowed, I've had to steal this one from Wikipedia. It felt like you were in another universe. 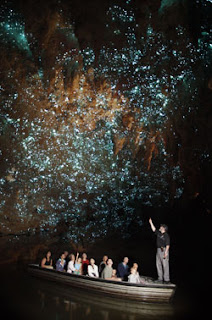 Since it was sunny when we arrived back in Rotorua we thought it would be a good chance to ride up the gondola and try some luging (luge-ing?). The view was quite spectacular since we hadn't seen much of the lake since we got here. There are a lot of activities you can take part in at the top - hiking, zip-line, sky-swing, etc. 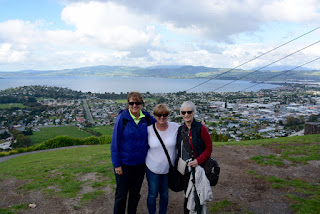 The 'luges' are small little sleds with wheels that you drive down the hill on a paved track - you control the speed with the handlebars and you can actually get up quite a bit of speed. A chairlift returns you (and the sled) to the top. In this photo you can see the lugers. Pretty fun! 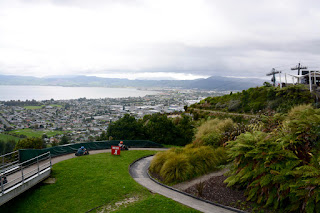 Tomorrow's plans include Hobbiton - perhaps Bilbo will be there!
at April 14, 2017