Shame on You, Barcelona

Most people who have visited here give a pretty good rating to this city and I can certainly see why. First of all it's full of architecture that ranges from the sublime to the ridiculous. 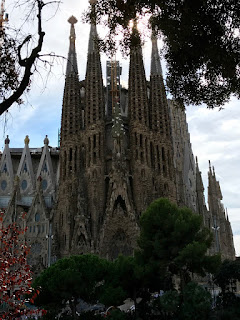 The Sagrada Familia is both ridiculous AND sublime. This is the church that has been under construction since architect Antoni Gaudi started it 130 years ago and will be finished in about another 10-15 years. 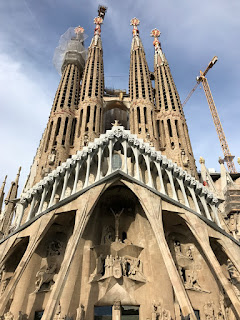 The spires already reach high into the sky over the city and the final ones will be much higher. If you zoom into the top photo you'll see very tiny people around the bottom - just to give you an idea of the scale.

Gaudi also designed many other buildings around the city - many of which make you wonder whether he was inspired or using architecture-enhancing medicines! 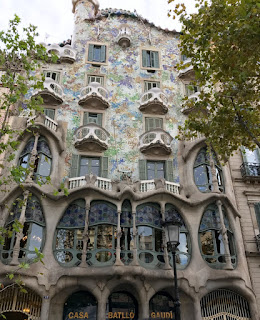 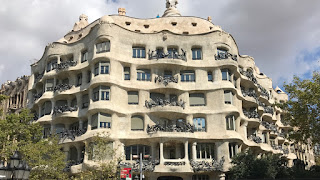 Barcelona is part of the Spanish area called Catalonia and this region is currently doing a Quebec-style referendum to achieve independence. Like Quebec, they have food, language, and culture that differ from the rest of Spain. Residents display their support by hanging Catalan flags, along with the 'si' sign and we encountered some marchers on Saturday. The vote was to take place Oct. 1 but apparently the Spanish government has declared it illegal and the political debate is taking a negative turn. Somehow this sounds a bit familiar to us Canadians!! 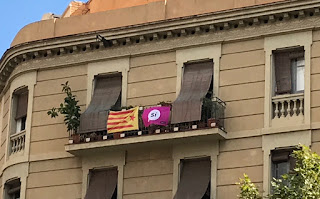 About an hour north of the city is the Monastery of Montserrat. Situated high up a hill, we took a train, a cable car, a funicular and a 15 min hike to get to this spectacular view.

I had heard that the oldest boys choir in Europe resides there and they sing in the basilica every day at 1:00. We got seats near the front just after 12 and by 12:30 the spectators were about 5 deep in the standing-room only aisles (no doubt a security person's nightmare). When they started to sing it was sooo beautiful - unfortunately the people holding up their phones and ipads to record in front of us was incredibly distracting. They sang one song, then an anthem (perhaps the Spanish anthem) then THAT WAS IT. I was pretty disappointed to have come all that way for basically just one song. I took this pic AFTER they finished singing. 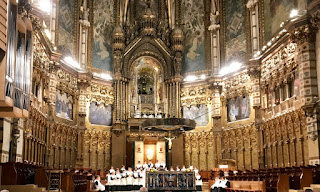 Food is another pretty big draw in this city. How many patatas bravas can one person eat? (Apparently quite a few.) Lots of inexpensive wine and cheese!! Great tapas, seafood and paella. Ross even tried the octopus (not my cup of tea). 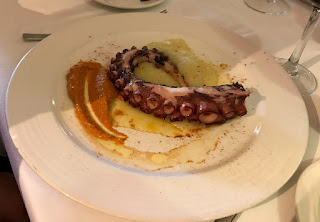 Barcleona has many wide boulevards lined with park like areas down the middle or along the sides. Lots of market areas and plazas and walking streets. Beautiful beaches, shopping galore.

Lots of fountains and surprising public art. The 'Magic Fountain' below is about a block from our apartment and has a show about 5 nights a week. 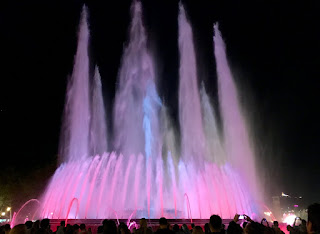 Before we came here I'd been reading about the backlash against tourists in this city. It's basically been overrun by the likes of us - costs for accommodation and food have made it difficult for residents to stay here and have affected their quality of life. Tourist buses crowd the streets and make travel difficult. The city has put a moratorium on new hotels.

I'm sorry Barcelona that you feel that way about us - but shame on you for building a city with such beauty and vibrancy and then not expecting us to come and enjoy it with you.
at September 19, 2017

Kerry Schultz said...
This comment has been removed by a blog administrator.
6:05 AM