Croatia might be one of the world's oddest shaped countries - if it is shaped like a backwards question mark, then Dubrovnik is the dot at the bottom, separated from the rest by the narrow corridor of Bosnia-Herzegovina. The economy of Dubrovnik depends a great deal on tourism and the main attraction is the old city.
I’ve been on the walls of several cities but this one is pretty remarkable. It was built in the 14th C, suffered some damage during the war in the 90s.  Because it’s been so hot and humid here, we chose a slightly overcast day, early in the morning, to walk the 2+km around. It took about 1.5 hours and as we were leaving the hordes of tourists arriving made us glad we’d started early.

Some views from the walls: 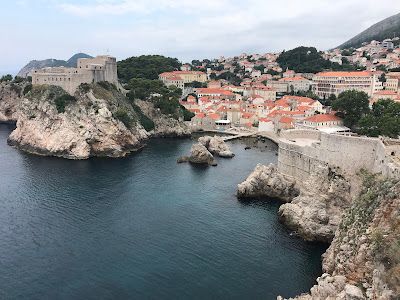 Massive cliffs down to the sea: 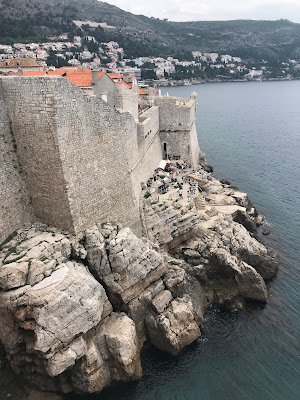 Although it’s mostly tourists staying in the old town there are some permanent residents with vegetable or ornamental gardens.

A panorama from the topmost corner.

And inside the walls at night:

With all the walking we’ve done we figured we’d earned a treat. A chocolate bomb with forest berries:

Like Venice, Dubrovnik has started to limit cruise ship traffic. There are many, many booths selling day trips, boat tours and other activities. Besides our trip to Bosnia-Herzegovina we selected the "Three Island Tour". Although Croatia has 1000 islands these 3 "Elaphiti" islands are about a 45 min boat ride away. The islands aren’t very big and the beaches, like all the beaches near here, are small, generally crowded and often rocky.
With the steep shorelines many little 'beaches' have been carved out with steps leading down from a pathway above.

Despite the lack of sandy beaches the blue/green water of the Adriatic is very appealing.

We found a nice restaurant near our flat that had a unique way of serving carbonara-mixed in a Grana Padano cheese round with some Canadian whiskey added, then heated to melt into the cheese. Delicious!

Our last night so we took the cable car to the top of the hill to see the old city from above and watch the sun set over the island hills of Croatia.