Haida Gwaii (formerly known as the Queen Charlotte Islands) proved to be quite a contrast to my recent trip to Croatia. The number of tourists we encountered was in the 10s, as opposed to 10 thousands; and I saw more sandy beaches in 5 days in Haida Gwaii than my 3 weeks in Croatia!

Our trip began with a flight into Sandspit which is at the north eastern tip of the southern island. Haida Gwaii consists of 2 main islands, and 100s of smaller ones. Just outside the airport is this gigantic copper/cedar sculpture of a Coho Salmon: 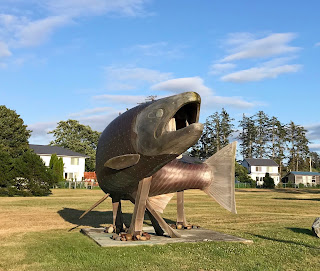 We were staying at the Seaport B'n'B and had this amazing view from our bedroom. As we were a bit farther north and at the western edge of the time zone, the sun set about 10:00. 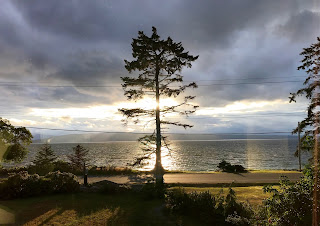 Sandspit is the only significant community on Moresby Island. It has 302 residents and we managed to tour the entire town in, to be generous, 5 minutes. However they've found a way to do away with lawnmowers on the ball diamond: 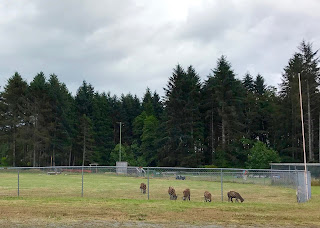 The next day we took the ferry (20 mins) across the strait to Graham Island which is home to a few more communities. Skidegate is known for its Haida Heritage Centre - don't miss this if you come here. We were just in time for the Totem Pole talk; each of the 6 totems that have been raised in the last few years were described in detail, highlighting their significance to Haida culture, symbols and mythology. 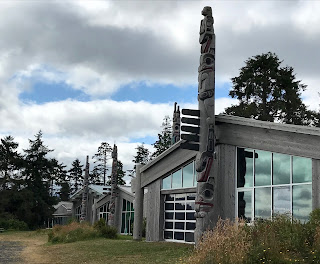 The museum includes an extensive collection of art, artifacts and information. Since many of the original artifacts were removed and taken to museums around the world, the Haida community is working to repatriate them.

A few miles up the road we stopped to check out this gigantic balancing rock. 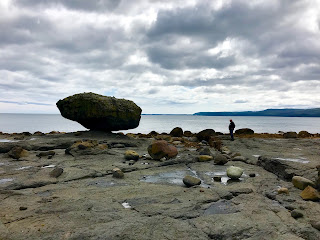 Then we headed north to Tlell, Port Clemens, Masset and Old Masset. At the very north eastern point of the island is the blowhole and although we didn't time the tides right to see it in action, the rock formations and miles of empty beaches made the drive/hike worthwhile. 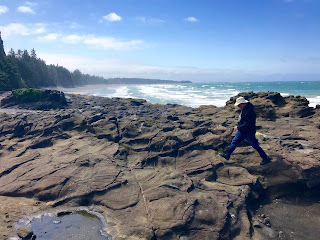 Saturday morning was the start of our 2-day Zodiac tour with Moresby Explorers. They also do a one day and 4 day as well as 8 day kayak trips.
This lovely canoe was in front of their offices in Sandspit. 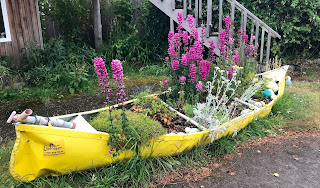 After a 45 minute drive on a gravel logging road, we arrived at Moresby Camp where we 'suited up': starting with our shirt, fleece, winter coat, rubber overalls, rubber coat, rubber up-to-the-knees boots then topped off with a PFD. Also critical was warm head covering. 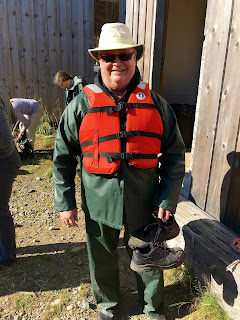 Although the rain gear kept us warm on the boat, thankfully it never served its real purpose. Clear blue skies and glassy waters greeted us as we headed off. 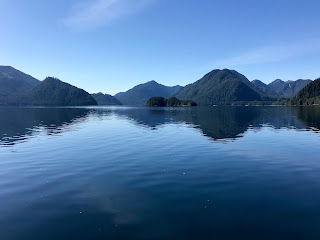 There were 10 of us (all from different parts of Canada) in the Zodiac plus our guide, Jessie. Our first stop was a walk through the forest, exploring the Sitka spruce, Western Red Cedar, Hemlock and alder. Because the deer eat most of the undergrowth the forest floor is completely moss covered which creates an 'other-worldly' feeling alongside the giant trees. 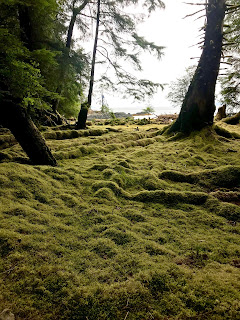 This particular location was a logging camp for many years in the 1940s and there are many remnants of machinery including this old steam donkey that was used in conjunction with the spar trees for hauling the logs out of the forest. 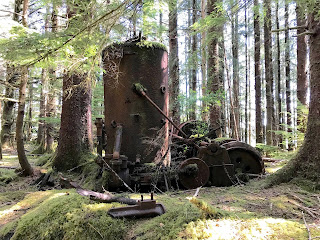 After lunch on the beach we headed to the first of our 2 'watchmen sites'. Historically the watchmen in the village were kind of like lookouts - watching for enemies approaching. After the devastating small pox epidemic wiped out most of the population (late 1800s), the remaining Haida evacuated from their original townsites and consolidated into a few communities (such as Skidegate). Many of the artifacts from these townsites were eventually (illegally) removed (stolen is the word you might use) and taken to museums all over the world. In an attempt to try to protect their culture, several Haida took on the task of becoming watchmen for the old townsites. There are currently watchmen on 5 original village sites and the program is now supported by Parks Canada and the Haida nation. The watchmen serve as guardians protecting, educating about their culture and helping preserve the sites.

Prior to contact with Europeans most of these villages consisted of 20-40 longhouses, a variety of frontal poles as well as mortuary poles, memorial poles and story poles. The total population might be 700-1000. The watchman at K'uuna was a young Haida man, Patrick Shannon, who graciously led us through the forest where you could clearly see the moss covered remains of the longhouses and poles which revealed the status of the person who lived there. Patrick clearly has a deep connection with his heritage. He was informative and well spoken and our 2-3 hours went by in a flash. 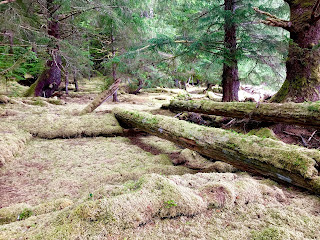 Remains of a pole that is being taken over by nature: 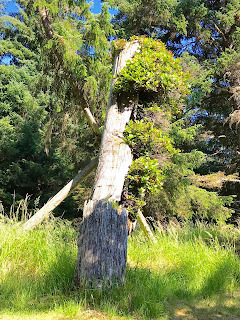 Our last stop for the day was the floating lodge - for dinner and accommodation. Quite surprisingly, it had all the comforts of home except internet and a shower! The pond in front had several huge 'fried egg' jellyfish and lion's mane jellyfish. 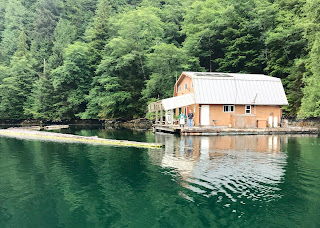 After a leisurely breakfast the next morning we headed out to a few more sites, including a small island covered in huge sea lions. The second watchman site was at Tanu where we were greeted by Penny and her 5-year old sidekick Raven who guided us through the village and up into the forest towards some waterfalls. Raven has lived on watchman sites since she was born and has a surprising amount of knowledge. She and Patrick (from K'uuna) left us with a lot of positive energy about the future of the Haida nation. 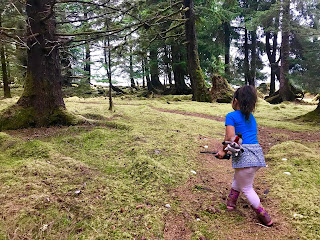 We stopped for one last walk through the forest but unfortunately a wasp nest was disturbed by the front of the group and I was the unlucky victim of the then-angered wasps! Thankfully a bit of After-Bite soothed the 2 or 3 bites I'd received and all was well as we returned back to Sandspit. 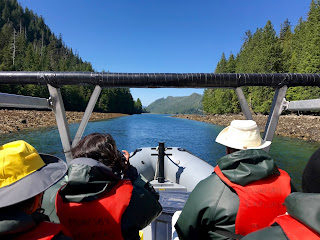 If you're like me and are interested in visiting different parts of our own province I'd definitely recommend a trip to Haida Gwaii. We only explored a very small part of it but we left with an incredible respect for the local culture and increased appreciation for the vastness of nature.
(Note that any information about Haida culture I've included here is just my own interpretation of what I learned.)