Starting on the wrong foot

Of course just to make things exciting the airline decides to cancel our flight the day prior to departing. Actually they only cancelled one of the 3 flights, the one that meant we wouldn’t make it to Toronto on time to catch the flight to Peru. This comes a few months after our original Kelowna/Vancouver flight was cancelled which meant we needed to completely change our plans as well as book an additional night in Lima. Airlines don’t really mind inconveniencing their customers like this, but try to make a small change yourself and hoo boy.

We found out first thing the morning before the scheduled departure and after a few hours of scrambling, emailing, calling (and being on hold and hold and hold......) we got it sorted out. In the end the trip to Lima was without any issues thankfully.

Lima is a very old city and the architecture has a very Spanish influence. This photo is in front of a building in central Lima. 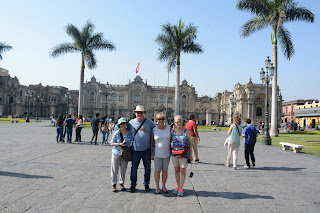 This fountain is in the same square and one day a year it’s filled with Pisco Sour, the national drink, and people bring their glasses to fill. Shouldn’t Canada have a national drink? 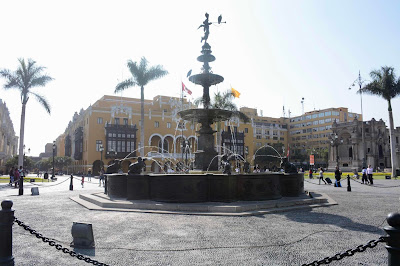 We hired a city tour today and our guide Athena took us to a bunch of historic and geological sites including the Parque del Amor (Love Park) with this gigantic statue of a couple kissing. Every February 14th there is a kissing contest to see who can kiss the longest, won this year by a couple in their 60s!! 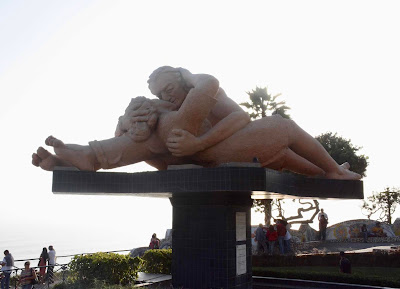 We stopped in at the Chocomuseum for some local chocolate tasting (yes of course I bought some and it’s delicious).
We’re staying in a very quaint colonial style hotel and our room has this giant balcony complete with cacti! 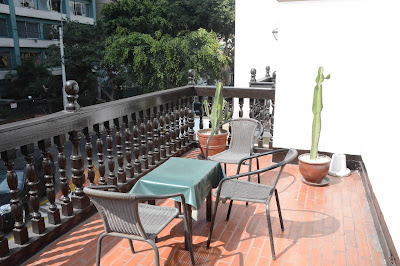 There are many shops selling “Peruvian” wares - all the colourful knits and weaving. Here’s Diane trying to choose from among a selection of dolls with bambinos. 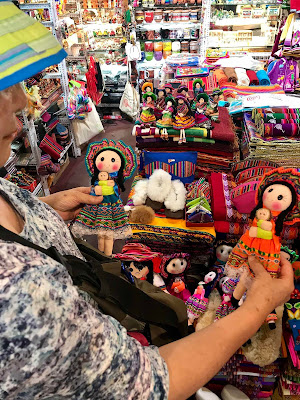 Tomorrow’s another full day in Lima before heading to the higher altitudes of Cusco. No plans yet but I think I hear the Chocomuseum calling!