Even though we’ve barely been here a week I feel that if our holiday were to end today I would be satisfied. We’ve done and seen so much already that it’s hard to put into words. Maybe some pictures will help!
Bonnie plays in a Gamelan orchestra (Indonesian instruments) and she took me to see the instruments which I really enjoyed as I’ve always had an interest in them. I even took a lesson while in Bali. They are metal xylophone-like instruments with large gongs and bells. Apparently there are several of these groups in Ireland. 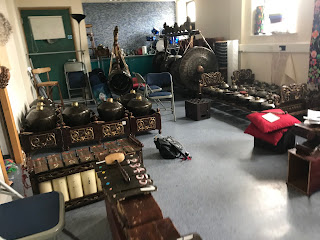 After leaving Belfast and a stay in Malin Head we drove to Donegal to stay at Mary's sister and her husband's place (Hillary and James). Actually their holiday home. Many people from NI come here for the holidays.
View from the top of Hillary’s spectacular garden. 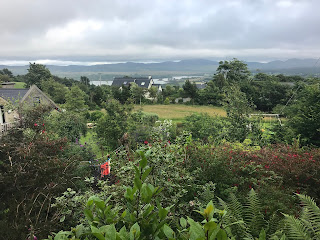 On the way over we ventured off the main roads and stopped at some very scenic headlands. 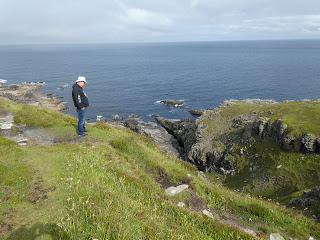 We arrived in Dunfanaghy and stopped in town at the pub where we saw a notice for live music at the castle so we headed over there for a bit. The castle is Glenvaugh, in a national park, and although it was late in the afternoon we caught a few acts performing. 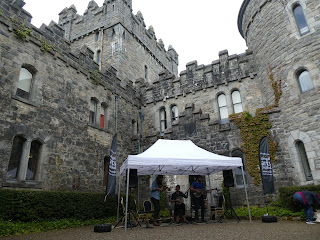 The next day we golfed at Cruit island (more about that later) and met the gang at Patsy Dan's pub in Dunfanaghy. It was late afternoon, the music had already begun and the place was crowded with babies, grandparents and every age in between. 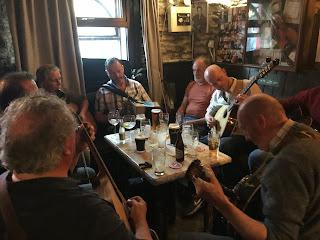 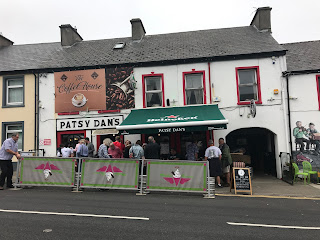 The next day we went early to the local fish market - Ross decided we would cook (his famous) seafood gumbo for dinner so we managed to score some delicious scallops and prawns/shrimp. Then more scenic views and a stop at the Harbour Bar jammed with holiday goers. 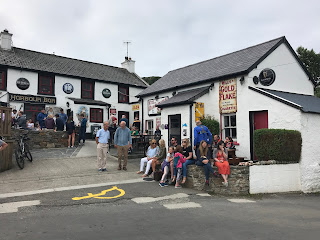 We downed our beer while being entertained by the traffic including this farm vehicle with a trailer trying to make its way through the jumble of cars (that red vehicle is parked and it’s a 2 way road). 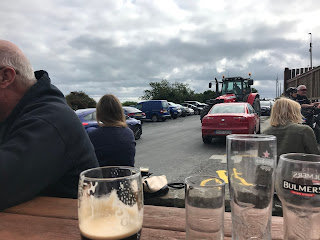 Many of the people in Donegal speak Irish, for some it’s their first language. As we drove south toward Crolly it became even more so with many road signs only in Irish. Fortunately our room in Crolly was directly above one pub and immediately across from another that had live music. A trad group started the session but a visiting youth group from Scotland played a set. 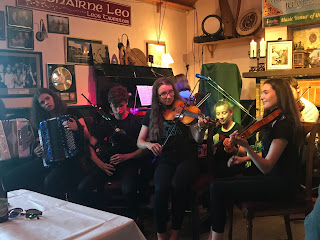 Finally the trad group was joined by 3 youngsters- the Kennedy family - 2 fiddles and a mandolin.. I’ll post some videos of the music later so you can enjoy it too. 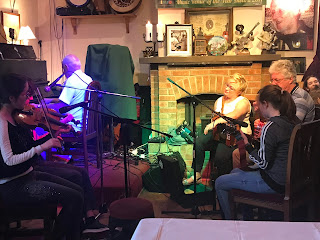 We’ve taken advantage of a few days of (relatively) sunny weather to take in some golf which has been an adventure itself (see next post).
These photos show the scenic beauty and good times to be had in Ireland. But no photo can capture the sheer exuberance and warm welcome shown to us by the many, many people we’ve met and chatted with. As an example, below you’ll see Seoirse (George in Irish) the shopkeeper where we purchased a few items. Shopping took about 10 minutes. Checking out took about 20. George had to find out where we were from, where we've been and where we were going. We learned about his history, his kids and the house he grew upon which is now the shop. By the time we left, we’d had a few good laughs and you’d think we were old friends. Oh and he threw in my chocolate bar for free. 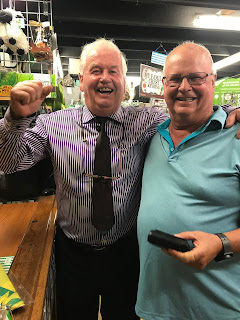